Drought: 'We are in tough times' 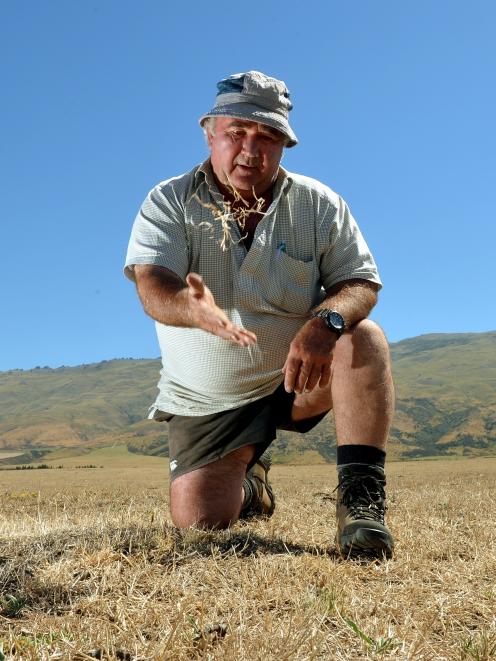 Lindsay Carruthers inspects one of the dry and dusty paddocks on his Strath Taieri farm yesterday. Photo by Stephen Jaquiery.
Unlike most farmers, Lindsay Carruthers does not use a rain gauge when it comes to measuring rainfall on his Middlemarch farm.

''I know by the puddles and they've been empty a long time,'' he said yesterday, surrounded by parched and barren paddocks, with the sun beating down.

Although Mr Carruthers (58) has farmed in the area all his life and encountered other dry spells, he reckoned the current dry conditions would probably have the most far-reaching effect on the area for 50 years.

When it came to yesterday's declaration of drought conditions on the east coast of the South Island, which included the Strath Taieri, as a medium-scale adverse event, Mr Carruthers said: ''I suppose the fact they recognise we are in tough times is something.''

On his 540ha sheep and beef property, he had cut stock numbers back to a ''skeleton number'' because of the lack of feed.

The majority of his cows had been sent to Riversdale to graze and he would be culling more ewe lambs.

He had been unable to get any crops sown and had already bought baleage. The cost of buying feed and paying for grazing was going to be significant, but it had to be done.

The winds in October and November ''really stuffed us'', he said. Farmers had been unable to achieve the best from their stock, because of the dry, and had to ''move things earlier''.

He had a centre-pivot irrigator, but it blew over in the wind last year. It was fixed between Christmas and New Year, but now there was insufficient water in the irrigation scheme to run it.

He was using a gun irrigator to water the same three paddocks continuously and it was ''holding its own'', he said.

He believed the ramifications of the drought would be felt for a long time.

''When your hoggets get pinched, depending what size the pinch is, they've got that for the rest of [their] lives.

''You don't come out of a drought until all that stock is off the property. That could be in five years' time,'' he said.

With his trademark humour, Mr Carruthers had been talking yesterday to passing cyclists on the Otago Central Rail Trail, which runs past his property.

When discussing the weather, he told them that, ''on the bright side'', it did not take him as long to do his jobs.

''It's getting closer every day, isn't it? he said philosophically, as he pondered when a decent rain might be coming.

Mr Carruthers was among a group of Strath Taieri farmers who attended a rural community barbecue in Middlemarch yesterday, organised by the Veterinary Centre.

Vet Dave Robertson, of Oamaru, said it was good to have a community get-together during tough conditions ''and a problem shared is a problem halved''.

Barbecues would also be held in Gimmerburn today and Palmerston on Monday and The Thirst Quencher, an event for North Otago and South Canterbury farmers, at the Kurow Hotel on Sunday.

''We've been feeding out to the ewes, to maintain their condition, since last week - that's exceptionally early.''

The family has farms at Ranfurly and at Naseby and although there was ''a slight green tinge'' after 5cm of rain over the past fortnight, there had been little grass growth.

The weather in October and November was ''disastrously cold and windy'' and the first cut of their hay was poor, only half the amount of last season's first cut, he said.

''Winter feed supplies are going to be short; we've struggled to get things to strike and grow and there's certainly no surplus hay and silage around this area.''

Despite the challenges presented by the hot dry weather this season, it was not ''all gloom and doom'', Mr Dowling said.

North Otago farmer Jock Webster, who has been through ''numerous droughts'', said this one was ''different but second'' to the 1988-89 drought that resulted in some farmers leaving their farms.

Particularly hard hit in that drought were the North Otago downlands, Waiareka and Kakanui Valleys.

Irrigation had transformed those areas since 2006 and disguised how bad this drought was, Mr Webster said.

Patches of rain over the past week to 10 days had helped the situation, but not broken the dry spell.

''There are some dryland farmers who will be really suffering and will need help,'' he said. - Additional reporting Lynda van Kempen and David Bruce