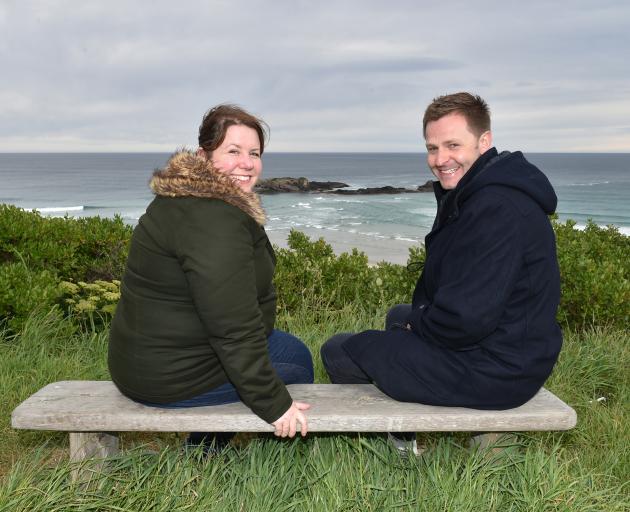 Dunedin writer Emma Schranz and director David Hay have won an international award for their short film Cold Fish, which was shot almost entirely at Smaills Beach, Dunedin. Photo: Tim Miller
A Dunedin-made short film with a morbid twist has won a top award at an Italian film festival celebrating the darker side of life.

Shot almost entirely at Smails Beach in Dunedin last year, the film centres on an elderly man who wants to kill himself after a life-changing event, by drowning in the ocean.

Before he is able to go through with it, he encounters a young child - who acts quite unexpectedly.

The film's writer Emma Schranz last year was awarded $10,000 from Short Film Otago for two scripts, one of which was turned into Cold Fish with the help of director David Hay.

Mr Hay had a ''deliciously wicked'' mind and had pushed the film into some dark places, Ms Schranz said.

''It started off quite a sweet film and ended up being dark and very clever.''

Without spoiling the film, Ms Schranz said audiences should not expect a typical happy ending.

Winning the award at the film festival was the ultimate way to thank Short Film Otago and the Otago Community Trust for the $10,000 funding given towards the scripts, she said.

''It really is the perfect way to say thank you to the community and show there is a platform for people to create great films and have them shown around the world.''

Mr Hay said the Ravenna festival was known for celebrating films which were slightly dark.

''Usually the story of a little boy would probably end with him saving the old man but in this film goes in a slightly different direction.''

The film would now be shown at more international film festivals and Dunedin audiences should be able to view the film early next year.