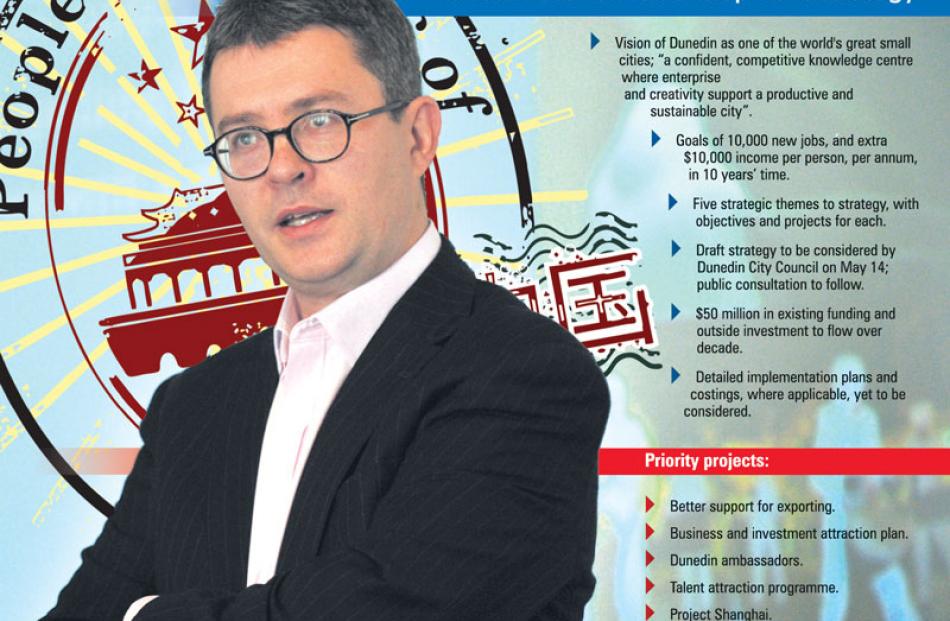 Dunedin businesses will be encouraged to seek their fortunes in China as part of a new 10-year economic plan designed to turn the Edinburgh of the South into one of the world's great small cities.

The strategy, unveiled at the Dunedin Public Art Gallery yesterday, followed two years of consultation and collaboration between the Dunedin City Council, the University of Otago, the Otago Polytechnic, the Otago Southland Employers' Association and the Otago Chamber of Commerce.

The strategy outlined initiatives designed to create 10,000 jobs, and boost individual incomes by $10,000 per annum, over the next decade.

It was also expected to lead to more than $50 million in spending likely to boost the city's fortunes - coming from existing council budgets, outside investment and other sources - over the same period.

There would also be new emphasis on business development, by rolling out "red carpet, not red tape", and converting the city's relationship with China into commercial returns.

Deputy mayor Chris Staynes - the chairman of the strategy's steering group - said yesterday Dunedin needed to do more to capitalise on its "unique" relationship with Shanghai, which remained largely focused on education.

The first Dunedin businesses were already exploring Chinese markets, helped by the Otago Chamber of Commerce, but more activity was expected, he said.

"I think we will see growth.

"There's no doubt there's a market there for high quality food and high-quality wine."

The strategy identified Shanghai as the "most advanced" of Dunedin's sister-city relationships, as well as the one with "the most potential to expand commercial opportunities".

As well as exporting to China, the strategy sought to attract more Chinese investment to Dunedin.

The strategy also identified a series of themes and "headline actions" to be progressed, including a list of six priority projects to be pursued first.

That included "Project Shanghai", which would see the council working to identify Dunedin business and investment opportunities to profile in Shanghai, helped by New Zealand Trade and Enterprise, the Ministry of Foreign Affairs and others.

Council chief executive Paul Orders said the strategy aimed to transform Dunedin into one of the few great small cities doing "extraordinary things" in the world.

Those that were successful had carved out a niche, based on a coherent plan, allowing them to punch "well above the weight suggested by their population", he said.

Success stories internationally included Cambridge, the scientific research and development capital of the United Kingdom, and Leuven, in Belgium, which had a population of just 95,000 but was a top European research centre with an economy built around academic research.

The strategy outlined how Dunedin could become a "knowledge centre" with high-tech and education businesses, attracting entrepreneurs, expats, students and researchers.

However, inaction would see Dunedin facing a bleak future as a small, peripheral city "invisible on the world stage and in slow decline".

Mr Orders said success required a switch from a narrow focus on economic development to a broader emphasis on city development, including Dunedin's lifestyle strengths, and support from private, public and non-profit sectors.

The strategy had so far cost the council $86,000 to develop, paid for from existing economic development budgets, while partner organisations contributed staff time, but not money.

Mr Orders said projects would be staggered over the next decade, but detailed implementation plans and costing would be considered after consultation.

More than 5000 people had been consulted since the strategy's inception, including individuals, businesses, groups and organisations, as well as economist Stephen Knuckey and city development consultant Greg Clark.

The draft would be presented to the next full council meeting on May 14, with councillors asked to approve it for public consultation over the next month.