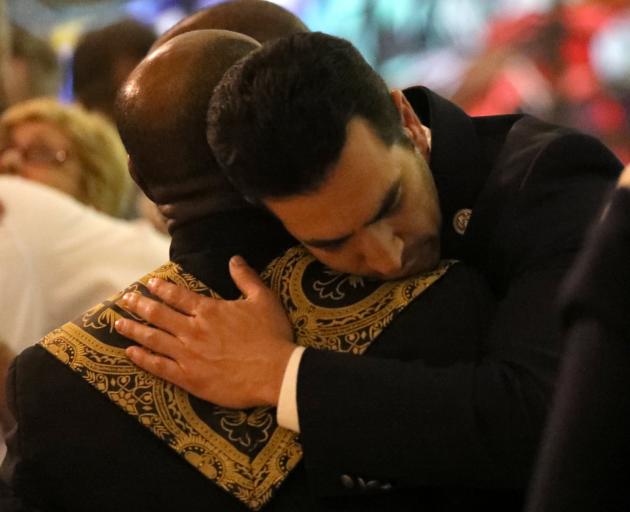 People mourn during an interfaith memorial service for victims of the Route 91 music festival mass shooting outside the Mandalay Bay Resort and Casino in Las Vegas yesterday. Photo: Reuters
A group of Dunedin men witnessed the horror and panic which unfolded following the deadliest shooting in modern US history.

At least 59 people were killed and more than 500 injured when Stephen Paddock opened fire on concert-goers at the Route 91 Harvest Music Festival in Las Vegas on Sunday night, local time.

As the carnage unfolded a group of seven Dunedin friends, who were in the resort city for a ''boys' weekend'', were playing golf at a driving range less than 1km away.

Andrew Elliott told the Otago Daily Times from the US yesterday morning, he was still ''pretty shook up''.

''We are staying pretty much right across the road [from the Mandalay Bay Hotel],'' he said.

The group was ordered to take cover at the driving range as the tragedy unfolded.

Emergency services sped past with sirens blaring, and one of the men believes he heard shots ringing out from down the road.

As they made their way back to the MGM Grand, where they were staying, they encountered shocking scenes.

''There were people ... with pretty bad injuries - blood all over the place,'' Mr Elliot said.

Thinking they were in relative safety at their hotel, the group was soon gripped by panic as rumours of a gunman on the loose spread through the lobby.

''Everyone scarpered off. Everyone was on edge.''

The tragedy had shaken the whole group.

One of his travel companions, Greg Easton, said the streets were filled with the injured and traumatised.

The mood in the normally bustling city was eerie yesterday, following the shooting.

In one heartening aspect to the tragedy, blood banks had been inundated with those willing to donate to help the wounded.

''We were all going to give blood today, but the people of Las Vegas have really turned out and there are six-hour-long queues,'' Mr Easton said.

A former Oamaru man living in Las Vegas said the community was pulling together in the face of horror.

John Paton is an automation technician for Cirque du Soleil, who works at the Michael Jackson One Theatre at the Mandalay Bay Hotel complex, where the shooter holed up on Monday.

Mr Paton, who grew up on a dairy farm on Waiareka Valley Rd and went to Totara School, finished work in the afternoon, local time, before the tragedy unfolded.

''Every one is saddened by this senseless act,'' he said.

Six months ago he had undergone workplace preparations for an active shooter.

''We always knew this could happen because we have large numbers of people visiting.

''A lot of thinking will be going on so this never happens again. We always hoped it would not happen.''