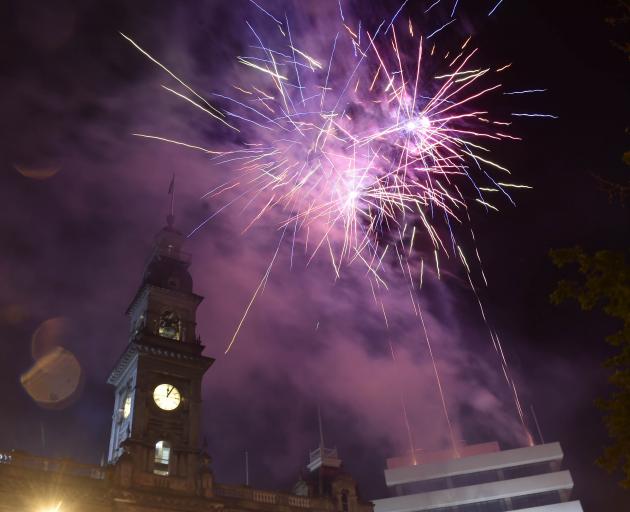 The new year was celebrated with a fireworks display in the Octagon in Dunedin. Photo Peter McIntosh
It was more a case of raining in the New Year than ringing it in for Dunedin.

The clouds opened and gave revellers in the Octagon a decent drizzling as the clock struck midnight.

But the wet start to the year only served to whet the appetite, or possibly the thirst, of those who had stayed up to see the start of 2017.

For Oamaru’s Gem Waterhouse, the motivation behind her first New Year’s Eve in Dunedin with Lizzie Stearn was simple.

“Hanging out with my best buddy,” she said.

“It didn’t exactly hose down and it stayed warm,” she said.

Ms Anderson said partygoers were a little slow getting into town but she reckoned there were about 18,000 there when the big hand hit 12.

The thunderous boom of the Robbie Burns cannon marked the end of 2016 followed by a five-minute explosion of fireworks atop the Civic Centre which painted the sky above Dunedin’s eight-sided heart with the fluorescent hope of a new year.

A traditional rendition of Auld Lang Syne by a solo piper formally closed the official proceedings but the party was far from over for most.

And it seemed love was in the air, sort of.

Auckland teenager Dylan Manahi said he had one goal for the night.

“It's just about having a good time. That's basically it, bro,” he said.

When asked to elaborate on his plans for the new year, they were equally straightforward.

Steve Coll and Tracey Taylor, of Dunedin, had parked up with their drinks in an ideal spot outside The Terrace Restaurant and Bar to enjoy the entertainment outside.

Their kids had recently flown the nest - “we can finally enjoy ourselves,” Ms Taylor said.

But when it came to plans for 2017, they were not quite on the same page.

“Chilling out and relaxing,” was Mr Coll’s verdict, while his partner was aiming for “a ring on my finger”.

Earlier, the gathering crowds were entertained by music from Jules & the Jam-Man and LA Social Club.

And there were no empty bellies with 13 food stalls on hand dishing up everything from hot chips to churros.

But one of the more obscure yet appropriate items on offer were inflatable green plastic frogs, about the size of a football, with flashing eyes.

Wilson’s Amusements staffer Charles Brown reckoned they had sold about 30 of the psychedelic amphibians before midnight.

He was not too worried about being behind the till rather than among the throngs.