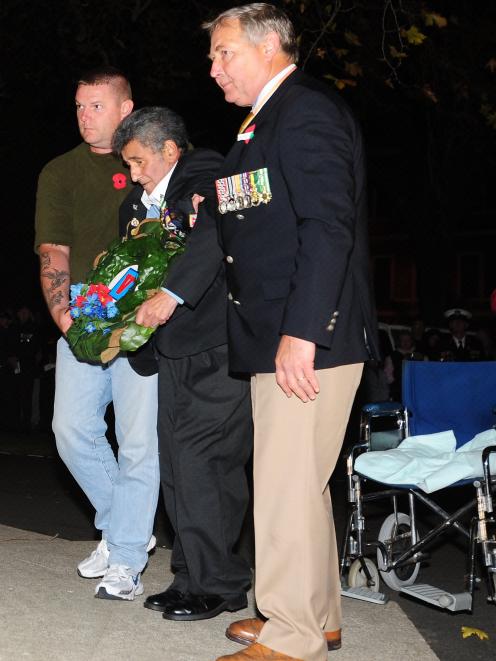 The crowd gathered at the cenotaph was also emotionally charged as the former gunner was assisted up the two steps at the foot of the monument by his stepson, Lance Evans, and fellow Vietnam veteran Lox Kellas, at what was expected to be his last dawn service.

The 63-year-old was fulfilling his dying wish - to lay a wreath to remember his fellow soldiers who died in Vietnam.

Mr Opai was diagnosed with cancer of the pancreas in February and now lives at the Otago Community Hospice.

His wife, Alva Opai, said he was ‘‘absolutely determined'' to attend the dawn service, as he had for many years, despite rapidly deteriorating health in the past weeks.

It was a touching occasion for Mr Opai, who was not normally an emotional man, his wife said.

‘‘I saw him wipe his eyes as they helped him back down.''

She said Mr Opai, whose health has deteriorated to the point he could no longer speak clearly, was ‘‘absolutely thrilled'' that he had been able to lay the Otago Vietnam veterans' wreath one last time.

Mr Opai served as a gunner on the howitzers of the New Zealand Army's 161 Battery.

Two of his brothers, a sister and a brother-in-law also served in Vietnam.

While he was in service, both his ear-drums were ruptured, he was stung by a scorpion and exposed to the toxic defoliant Agent Orange.

While he was happy at a successfully completed mission yesterday morning, and had spent several hours after the dawn service at the United Services Club, with other veterans, he was absolutely exhausted and had fallen into a deep sleep as soon as he returned to the hospice, Mrs Opai said.

- The gun used yesterday at the Dunedin dawn parade was a 105mm howitzer from 161 Battery.

Two rounds were fired by former gunners Steve Simpson and Alan Riddle, from the disbanded Dunedin-based 31(B) Battery.

The battery fired its last round, of almost 232,000 in Vietnam, on May 1, 1971. When it withdrew from the front line, the battery was awarded the South Vietnam Presidential Unit Citation of the Cross of Gallantry with Palm Leaf, in recognition of its service.

-After being damaged by vandals a few years ago, the headstone of Private John Bevin has been restored and re-dedicated in a ceremony at Dunedin's Southern Cemetery.

Led by Dunedin's Anglican Bishop, the Rt Rev George Connor, yesterday's commemoration service was attended by about 30 people including members of the Bevin family, and police.

Pte Bevin was a member of the 8th Royal Irish Hussars and participated in the Charge of the Light Brigade in 1854, before moving to Australia.

He was recruited, during the gold rush, to join the police in New Zealand. In 1861 he was sworn in as a mounted constable in the Otago police and he rose to position of sergeant major before his death in 1892.

The restoration of the headstone was sponsored by the Otago Mounted Rifles.

John Neilson, whose idea it was to restore the headstone, said people could now read most of the inscription, although one section was beyond repair. - With NZPA