The Empire strikes back 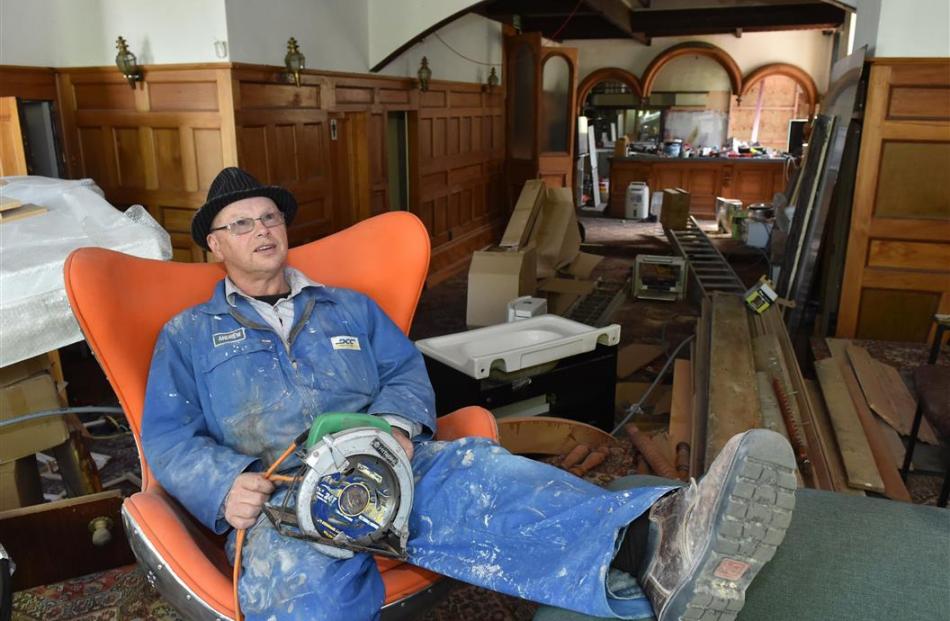 Empire Hotel owner Jon Leng sits on stage in the first floor bar where the Dunedin Sound was born. Photos by Gregor Richardson.

A new era for an old treasure - the restoration of the Empire Hotel, birthplace of the Dunedin Sound - is under way.

The 1879 building found fame in the 1980s when young Dunedin bands were offered the chance to play live in its first-floor bar.

In later years, the venue's Princes St location and small size proved to be insurmountable hurdles and last drinks were poured in 2009.

Other than occasional accommodation use, the building had stood virtually derelict since then, new owner Jon Leng said yesterday.

But the re-emergence of the Exchange area, coupled with the revitalisation of the warehouse precinct, had made the area viable again, he said.

He expected to spend about $1million on strengthening, restoration and fit-out.

While the two upper floors - including the first-floor bar which hosted the Dunedin Sound - would become apartments, the original ground-floor bar would be remodelled as a bar and live music venue, he said.

Original posters from the Dunedin Sound days had been unearthed and would be displayed alongside other Dunedin Sound memorabilia.

The first-floor bar would be relocated to the ground floor.

Mr Leng said he understood the history of the first-floor bar but developers of historic buildings had to ensure those buildings paid their way.

The two first-floor two-bedroom apartments and the sole second-floor three-bedroom penthouse would make the building financially viable, he said. Retaining the ground-floor bar was more of a "tribute'' to the building's heritage than a business-minded decision.

That heritage stretched back to 1858 when the first hotel, called the Queen's Arms, was built on the site.

The current building housed three bars and accommodation and was renamed the Empire Hotel in 1898.

Mr Leng said photographs dating back to the 1880s had been unearthed and showed the building's original design, including an elaborate facade.

Those photographs had been used to design a replacement glass-reinforced concrete facade which had been constructed in China and shipped to Dunedin earlier this month.

That facade was now being installed, with an expected completion date of April next year.

The original fire escapes adorning the facade would not be removed, while the final colour scheme would be determined when Mr Leng was able to discover the building's original colour, he said.

The ground-floor bar's original lath and plaster decorative cornices would be restored or, where necessary, replaced.

The bar was expected to be open at the end of next year with the apartments to follow at a later date.

"It's giving something back to the people of Dunedin, because they want people to enjoy what these buildings would have looked like.''

• Replaced by Thomas Bedford Cameron-designed brick building in 1879, renamed the Empire Hotel about 1898.

• Upstairs bar became the centre of the Dunedin Sound in the 1980s, hosting bands including The Verlaines, The Clean, The Chills, Sneaky Feelings and The Bats.