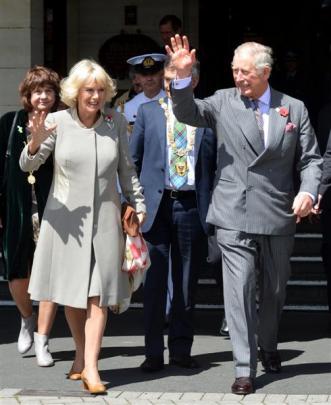 Prince Charles and the Duchess of Cornwall on their walk from the Dunedin Railway Station to Toitu Otago Settlers Museum yesterday. Photo by Stephen Jaquiery. 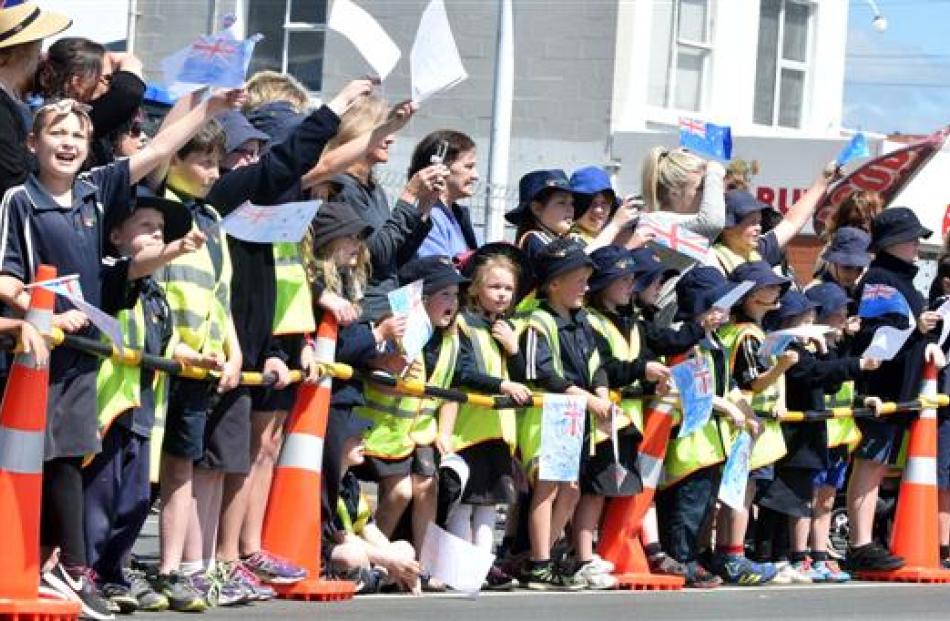 Wellwishers in Mosgiel await the arrival of Prince Charles and Camilla, Duchess of Cornwall yesterday. Photos by Peter McIntosh. 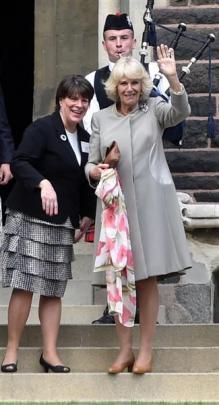 The duchess and University of Otago vice-chancellor Prof Harlene Hayne outside the Registry Building at the university in Dunedin. 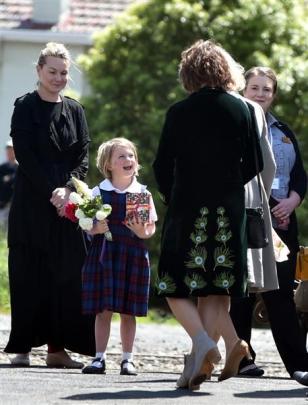 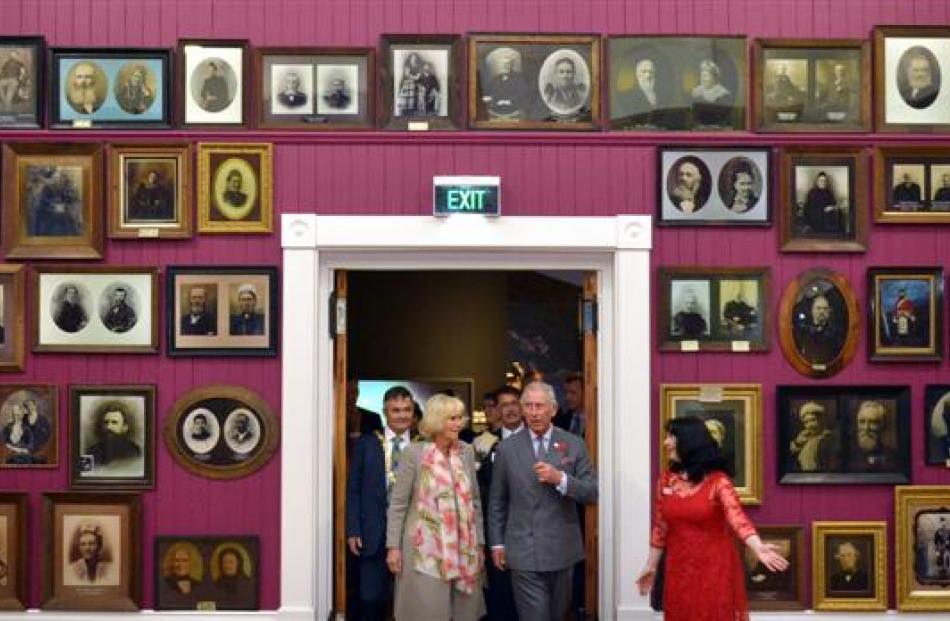 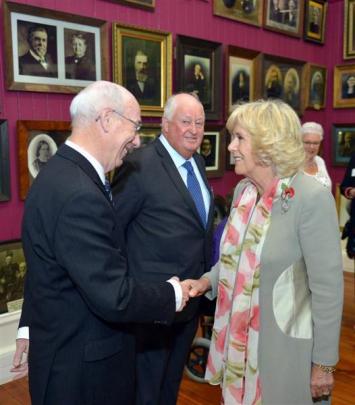 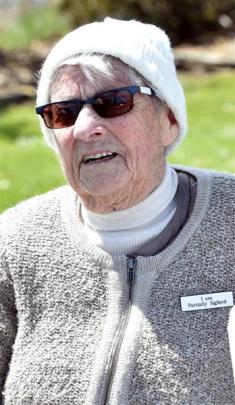 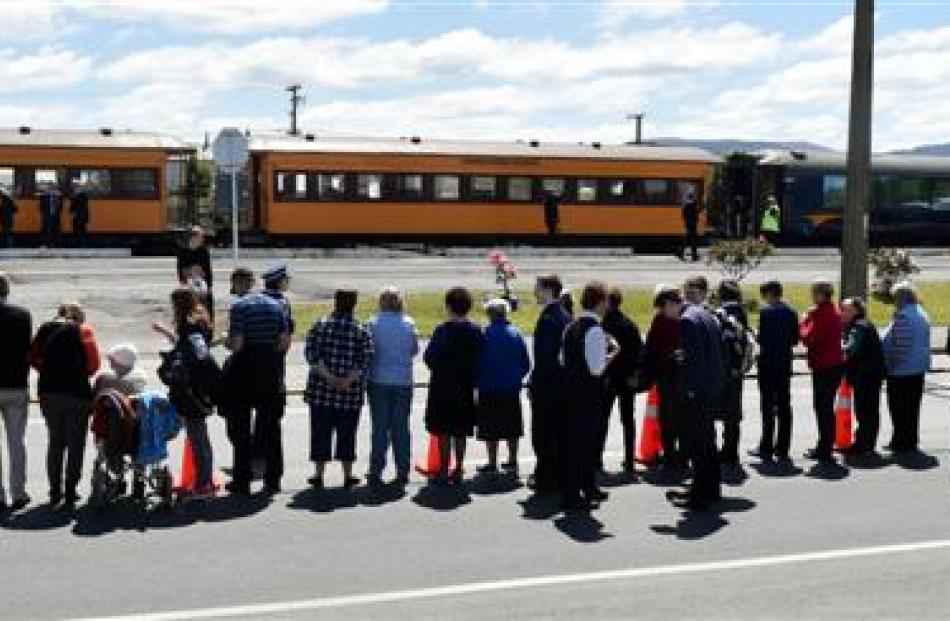 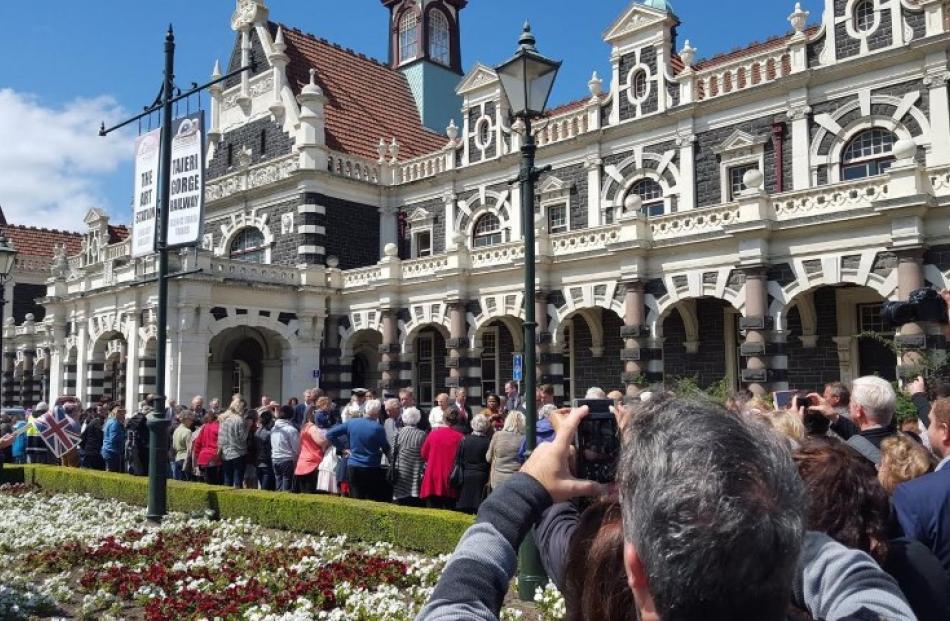 Thousands turned out to greet Prince Charles and the Duchess of Cornwall during their visit to Dunedin yesterday.

The city turned on a sunny day for a visit that had locals buzzing.

The couple arrived at Dunedin Airport, from Wellington, in a Royal New Zealand Air Force Boeing 757 to a small gathering early in the afternoon.

The prince was wearing a grey double-breasted suit, white shirt and tie, while the duchess wore an off-white knee-length jacket, complemented by a floral scarf, clutch purse, sparkling brooch and gold bracelet.

They waved as they alighted from the plane and left quickly for Mosgiel in a high security convoy.

About 700 people greeted the couple at the Mosgiel Railway Station, where they boarded a Dunedin Railways' Taieri Gorge train to travel to Dunedin.

When the duchess exited the car in Mosgiel she walked straight to Olive Austin (91), of Dunedin, who was waiting in the crowd in her wheelchair.

Mrs Austin said the duchess told her Dunedin reminded her of Scotland, and the weather in Mosgiel was beautiful and much better than in Wellington.

Before the Royal couple arrived, a security guard allowed St Mary's School pupil Saffron Chisholm (5), of Mosgiel, on the platform to present gifts she had brought.

On meeting the Royal couple, Saffron curtsied and gave flowers to the duchess and chocolates and a crossword book to Prince Charles.

Saffron said she had considered doing a handstand instead of a curtsy, but decided against it. The experience had been ''great''.

As the train departed, the Royal couple stood at the back of the last carriage of the train and waved to the appreciative crowd.

A colourful and excitable crowd of about 2000 waited at the Dunedin Railway Station, many with cellphones in hand, and some sporting the Union Jack.

Jan Wheeler, of Moeraki, held a bunch of roses for Prince Charles, along with a sign welcoming the couple to Dunedin.

She said the prince asked her if the flowers were for him and he thanked her, while the duchess said the gesture was ''very nice''.

A phalanx of security personnel followed the couple on the short walk to the Toitu Otago Settlers Museum, which took about 20 minutes.

The pair were accompanied to the museum by Dunedin Mayor Dave Cull, and were welcomed by director Jennifer Evans and council chief executive Sue Bidrose, both wearing Dunedin designer Charmaine Reveley outfits for the occasion.

The welcome to the Royals in the foyer included a haka and a speech by Prof John Broughton, of the University of Otago.

Prof Broughton noted the success of the All Blacks at the Rugby World Cup, and presented the Royal couple with World Cup pins.

After a waiata, Mr Cull led the couple through the museum to the Smith Gallery, where they met descendants of some of the early settlers whose portraits cover the walls.

About 150 people waited for the couple outside the museum, and clapped and waved as they left.

Ms Evans was delighted with the visit.

''They were just so gracious and friendly.''

After the museum visit, the couple parted ways, the duchess going to the University of Otago, where she met staff, authors and poets, and talked of her passion for literature and the arts.

She said it had been a wonderful opportunity to meet New Zealand writers.

''So it is hardly surprising that I feel at home here, celebrating with you this country's huge contribution to the world of literature.''

The virtual trip featured the same driver who drove Prince William and the Duchess of Cambridge in a jet-boat trip on the Shotover River when they visited New Zealand last year.

''He had a good navigator helping him.''

The couple then visited the Orokonui Ecosanctuary, where Prince Charles got to hold a tuatara.

The visit, the last event of the day in Dunedin, coincided with national Conservation Week.