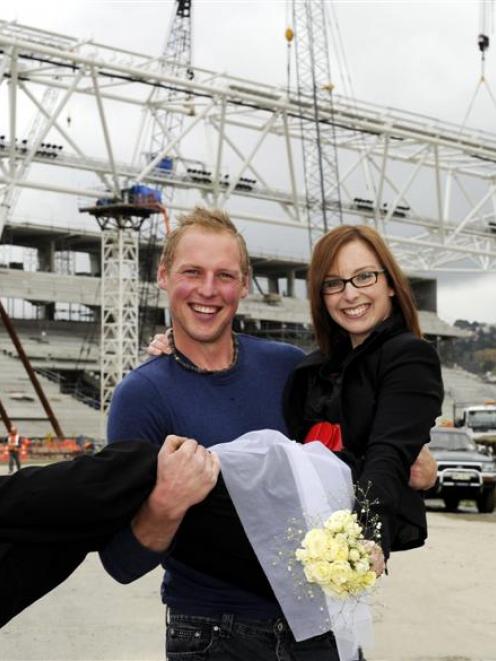 The couple, who met 13 years ago and had been engaged nearly two years, had been searching for "something a bit different" as a venue for their wedding, which they expected to take place late next year.

After celebrating the nuptials of up to 25 friends and family at a variety of venues in recent times, their attention turned to the half-finished stadium slowly taking shape in Dunedin.

"We thought this would be something a bit different and that we would remember," Mr Van Leeuwen said.

The couple had made an initial approach to staff at Dunedin Venues Management Ltd, which is responsible for running the stadium once completed, and hoped to make a final decision in the next few months.

Mr Van Leeuwen said it was "quite likely" they would stage their reception at the venue, and possible they could consider exchanging vows in the middle of the playing surface.

"I think something like that wouldn't be a bad idea," he said.

None of the couples' parents, other family or friends knew they were considering the idea, but Miss Paterson said the day was "just about having fun, and not getting too stressed about the whole thing".

Mr Van Leeuwen was a keen sportsman, having represented New Zealand in ice hockey a decade ago.

There was also a stadium connection for Miss Paterson.

She worked for Forsyth Barr - the venue's naming sponsor - and had featured on promotional stadium material.

"It would be quite appropriate to get married out there as well."

The extra space of a stadium venue would also come in handy, she joked.

"We want somewhere big enough for all our family."