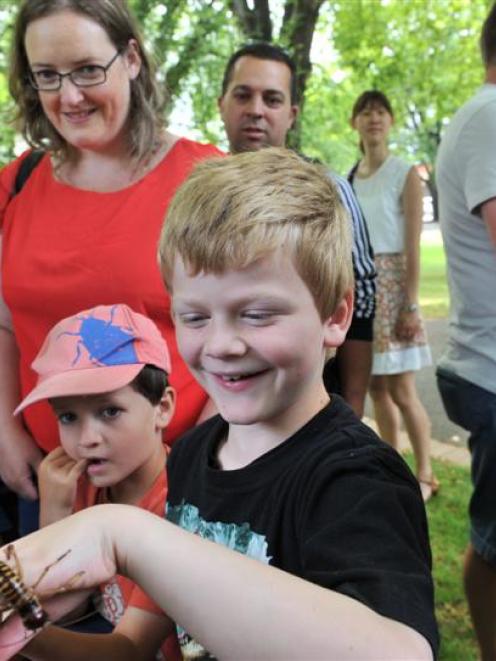 James Hurley holds George the weta at the Otago Museum Bug Fair on Saturday. Photo by Linda Robertson.
Dozens of children - and their parents - were bugging out at the sight of creepy-crawlies at the weekend.

The Otago Museum hosted a Bug Fair on Saturday to support its free exhibition ''Bugs: the Mega World of Minibeasts''.

Everything from bees to beetles to the Bugman were on display.

Entomologist Ruud Kleinpaste had children mesmerised with his assortment of grubs, beetles and wetas.

For 8-year-old James Hurley, of Dunedin, it was the highlight of the fair.

James handled the weta with great composure - at least until it ''kept jumping off''.

''It kind of felt like something grasping on to me and then jumping off,'' he said of the experience.

As a self-proclaimed bug fan, meeting the Bugman was an occasion to remember.

He was also quick to point out his favourite bug.

''It would have to be the dung beetle because they roll around in dung,'' he said, laughing.

However, despite his admiration for the creature he did not envy its living situation - ''I would not want to do it''.

Otago Museum public programmes manager Vicki Lenihan said she hoped the fair would instil enthusiasm, such as James', into others.

''I just hope that everyone that comes along goes away with a renewed or new admiration for their arthropod buddies,'' she said.

''These creatures are amazing. They do things so efficiently that we could never replace them with things that we could invent or build.''

She hoped the fair, and the exhibition, would break down people's fears and phobias when it came to our creepy-crawly living mates.

''It's about trying to get kids to lead the charge to their adult parents that insects aren't scary - they are important.''

Judging by the smiles on the faces of children and adults alike at the fair on Saturday, she was winning the battle.

The free exhibition ''Bugs: the Mega World of Minibeasts'' runs until May 10.