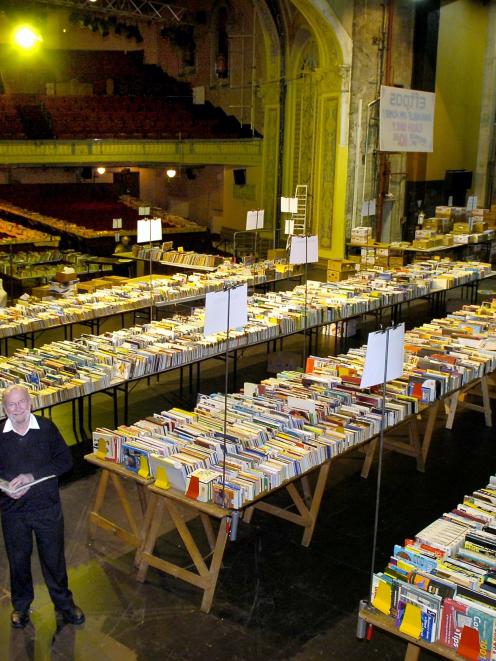 Doug Lovell takes a look at one of the hundreds of unmarked books now selling for $1 at the Regent 24-Hour Book Sale. Photo by Jane Dawber.
It is a price rise 28 years in the making.

The Regent 24-Hour Book Sale has increased its unmarked book prices from 50c to $1 for this year's sale, which starts at noon on Friday.

Organiser Doug Lovell said the increase meant book sorters had been more discriminating this year so the quality of books had improved.

The price rise, the first for unmarked books in the history of the sale, was less than half the level of inflation and feedback had so far been positive, he said.

"That is the charm of the sale, finding a bargain."

The funds would go towards stage two of the Regent Theatre redevelopment, including a new counterweight system that was estimated to cost about $1 million, Mr Lovell said.

Among the sale's finds was the 1882 Grammar of the New Zealand Language, by R.

Some nice, very old New Zealand histories and first editions by the likes of Graham Greene, John le Carre and Ian Fleming would also be on offer, he said.

"We've also got an amazing number of mint copies of books on gardening and horticulture."

Organisation for the sale had gone well thanks to the number of university students helping out, he said.

The residential hall University College had adopted the sale as its community project, and other students had come along to help.

"We're all 28 years older, so we're not throwing boxes around like we used to. We are grateful for their help."