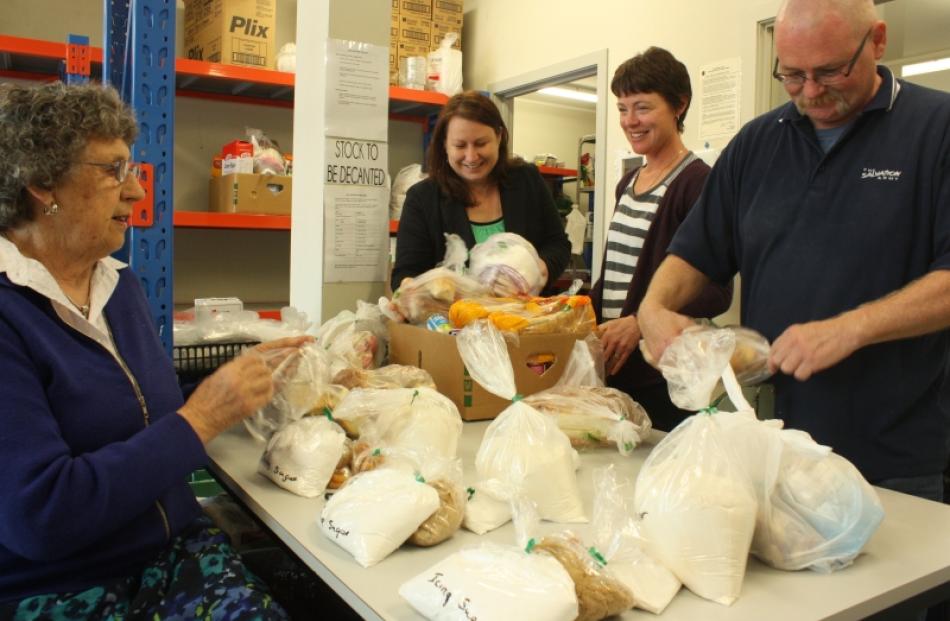 Preparing food parcels for the Salvation Army food bank are (from left) Pat Moyle, Ruth Harrison, Melanie Aicken and Ed Thompson. There have been 800 more food parcels given to families in Dunedin this year compared to 2012. Photo by Tim Miller

With Christmas just around the corner, the Salvation Army foodbank is preparing for its busiest time of the year.

Salvation Army Dunedin community ministries manager Lindsay Andrews said the period before Christmas and the start of the new year were the busiest times for the foodbank.

The foodbank aimed to provide about 150 food parcels and Christmas baskets to families in need, Mr Andrews said.

So far this year, the Salvation Army had given 2225 food parcels to families in need, which was about 800 more than last year, he said. There had been a 51% increase in the number of families being referred to the foodbank.

''What is very alarming for us is the number of waged families we are seeing, which means that a lot of people out there - not just those who are out of work - are really struggling.''

People were already feeling pressured, so the foodbank could start to see an increase in referrals from now until next year, he said.

As well as food parcels, the Salvation Army provided presents to families so they could celebrate Christmas.

''It's not just about giving out food, it's about helping those families who are struggling financially to also share in the celebrations,'' Mr Andrews said.

To help deal with the demand, the Salvation Army is teaming up with Rialto and Watties to run the ''Cans Film Festival''.

Now in its 20th year, the Cans Film Festival supports the Salvation Army's Christmas appeal by showing a movie with the admission price being a donation of canned food.

On Wednesday, Rialto will be playing the film Planes at 5pm and people can give a can of food for a ticket. Watties will match every donated can with another can.

''We are very grateful for all the support from the Rialto, Watties and the public,'' he said.