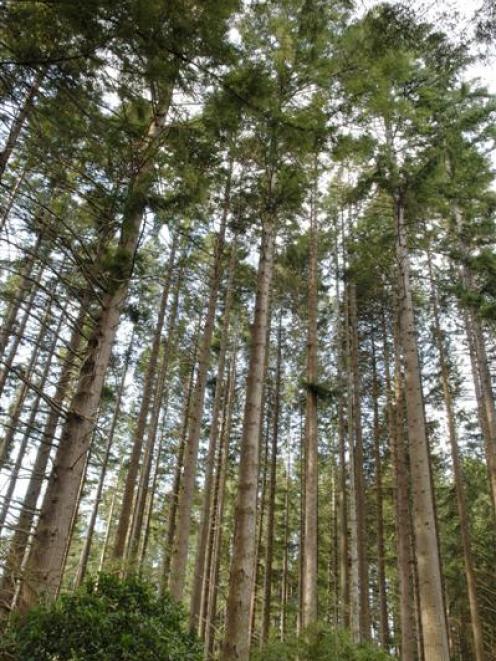 Douglas fir, such as these owned by City Forests near Three Mile Hill Rd, in Dunedin, yesterday, have double the carbon credit value of radiata pine. Photo by Linda Robertson.
Southern forester Ernslaw One has sold more than $10 million worth of carbon credits to the Norwegian Government - believed to be the first international carbon credit sale by a New Zealand company.

A company spokesman said the credits were sold overseas out of "frustration because of the political interference here" over the Emissions Trading Scheme.

This makes it the world's largest forest-sink sale to date.

Ernslaw recently sold about $1 million worth, or 50,000 credits at $20 each, domestically.

The international deal is being hailed as the start of a possible major export earner with "enormous potential" for Otago and Southland.

The Ernslaw sale also brought into sharp focus uncertainly over the future of the Emissions Trading Scheme (ETS), which has been put on hold by the Government and is under review.

Privately-owned by a Malaysian family, Tapanui-based Ernslaw One has almost 28,000ha of forests - 11,000ha of Douglas fir in Otago and Southland and almost 17,000ha of radiata pine in the North Island. The potential for millions of dollars in revenue for the South lies in the Douglas fir, which can absorb twice as much carbon as radiata pine.

The carbon credits could be sold internationally during the Government review.

Ernslaw One chief executive Phil De La Mere said the sale was "very good news" at a time when the forest industry was shrinking and hundreds of jobs had been lost.

He declined to confirm the per-tonne price paid for the carbon credits but said it was "significant" for Ernslaw.

Mr De La Mere said that with the ETS under review, there was no need for domestic carbon emitters to buy credits until they knew the conditions attached.

"We sold the credits overseas out of frustration because of the political interference here," he said, citing Labour's implementation of the ETS and the National Government's desire to implement changes.

Ernslaw environment manager Peter Weir, who is also chairman of the New Zealand Forest Owners Association. said the ETS select committee had recommended New Zealand's ETS be linked to international trading rather than a carbon tax as the primary economic way of managing climate change.

Southern Wood Council chairman and the chief executive of Dunedin City Council-owned City Forests, Grant Dodson, said any government modifications to the ETS legislation from the review had to take the needs of New Zealand forestry into account.

"Landowners can then maximise the opportunities that now exist for international carbon trading."

> Limits on greenhouse gas emissions, with those exceeding their limits having to buy carbon credits from those with credits to spare.

> These can be converted into assigned amount units for international trade.

> The Southern Wood Council represents Otago and Southland forest owners with an annual harvest of 1.2 million cu m of wood and 140,000ha of forests.