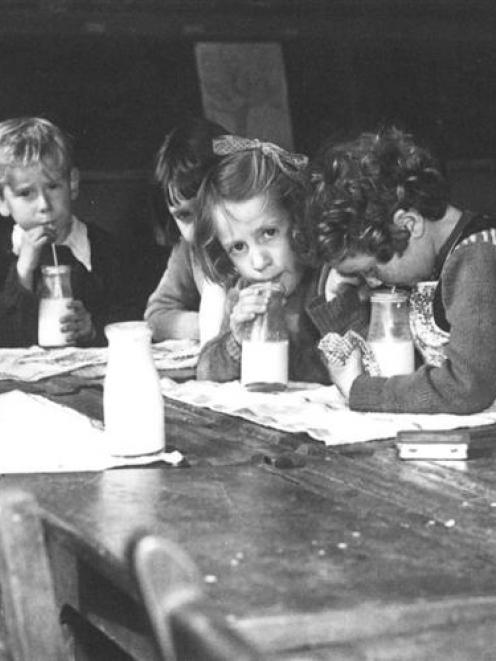 Northeast Valley School pupils drink their milk in the 1950s. Photo by Evening Star.
Otago primary school children can expect to receive a free daily serving of milk next year, as part of a national bid to become ''the dairy nutrition capital of the world''.

Fonterra's ''Milk for Schools'' programme will be rolled out in Southland primary schools first, at the start of term 1, January 28, and will then spread through the country during the year.

By the middle of term 2, all areas of the South Island are expected to be receiving school milk.

In launching Milk for Schools yesterday, Fonterra chief executive Theo Spierings said he hoped all New Zealand schools wishing to take part would be receiving the low-fat 180ml servings by the end of term 1, 2014.

A previous government-backed free school milk scheme in New Zealand was stopped in 1967.

Otago Primary Principals' Association president and Bathgate School principal Whetu Cormick said Milk for Schools was a positive initiative for children across the country. Many lower-decile schools already had access to other health initiatives, such as Kick Start Breakfast and Fruit in Schools, and the milk scheme would provide some equity across all New Zealand schools, he said.

The programme was trialled in Northland this year, and University of Auckland research showed Northland children's milk consumption at school and at home had increased significantly since the pilot began.

''We are totally committed to Fonterra Milk for Schools because we believe it will make a lasting difference to the health of New Zealand's children,'' Mr Spierings said.

''New Zealand is the largest exporter of dairy products in the world, but at home, we're not drinking as much milk as we used to.

''We want to be the dairy nutrition capital of the world, and this starts with our kids.''

A Fonterra spokesman refused to reveal the cost of one serving of milk for a child, but said the programme was expected to cost in the millions.

''Schools play a key role in shaping children's lifestyles. This includes their diets and attitudes towards nutrition, so it's incredible to be able to offer this healthy product every school day,'' Mr Beere said.

• It has been 45 years since milk was last provided in New Zealand schools.

• The first Labour government introduced the free milk in schools initiative in 1937 to improve the health and welfare of young New Zealanders following the Great Depression, and use up surplus milk. By 1940, the milk was available to more than 80% of pupils.

• Despite the initiative being a world first, not everyone enjoyed it. Crates of milk were usually stored in a raised, small slatted shed, close to the school gates.

• Often the milk was warm, and the taste and smell did not appeal to all children. Amid increased public doubt about the health benefits of milk, and financial pressure, the milk in schools scheme was dropped in 1967.