Garden theft believed to be by drug seekers 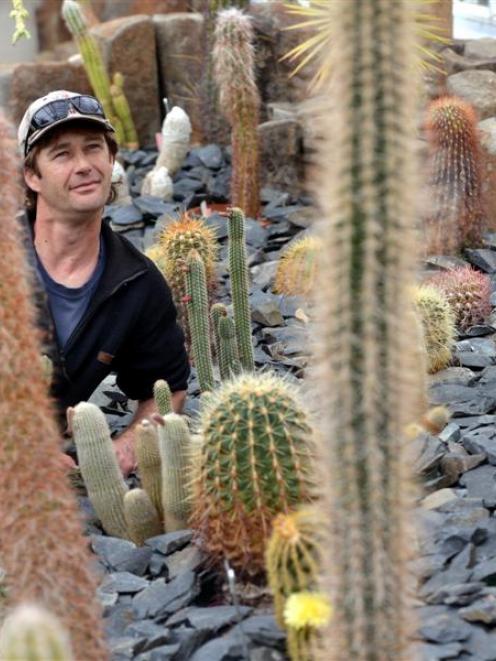 Winter Garden collection curator Stephen Bishop with cacti on display in a glasshouse at the Dunedin Botanic Garden. Photo by Stephen Jaquiery.
Dunedin Botanic Garden staff are on high alert following a break-in by someone they believe was looking for hallucinogenic drug-producing cacti.

A glasshouse where cacti are on public display was broken into at the weekend and a security camera was stolen.

Garden curator and team leader Alan Matchett said the theft of the camera had raised concerns that someone might have been looking for cacti species which can produce naturally occurring psychedelic drugs.

Mescaline, or 3,4,5-trimethoxyphenethylamine, is a naturally occurring psychedelic alkaloid of the phenethylamine class, which can be extracted from the peyote cactus (Lophophora williamsii) and occurs in the San Pedro cactus (Echinopsis pachanoi), the Peruvian torch (Echinopsis peruviana), as well as in other members of the Cactaceae family.

It is known for its hallucinogenic effects, similar to those of LSD and psilocybin, and shares similar chemical structures to the human neurotransmitter dopamine.

No drug species are on public display in the glasshouse.

However, Mr Matchett said the garden did have several examples of cacti which could produce class A drugs, but they were kept at an undisclosed secure location.

The security camera was installed after several break-ins during which cacti were damaged or stolen, Mr Matchett said.

The camera had since been replaced.

He declined to say how many times cacti had been stolen from the garden in the past, but said as a result of those thefts, some cacti specimens were no longer kept on public display.

''We try not to grow certain cacti on display if they are susceptible to theft.''

He said there were other drug-producing plants in the garden, such as poppies, but declined to say what or where those plants were.

''There are some that are definitely capable of producing class A drugs.''

Police investigations into the theft of the security camera are continuing, Sgt Aitken.