By George, this fan takes it seriously 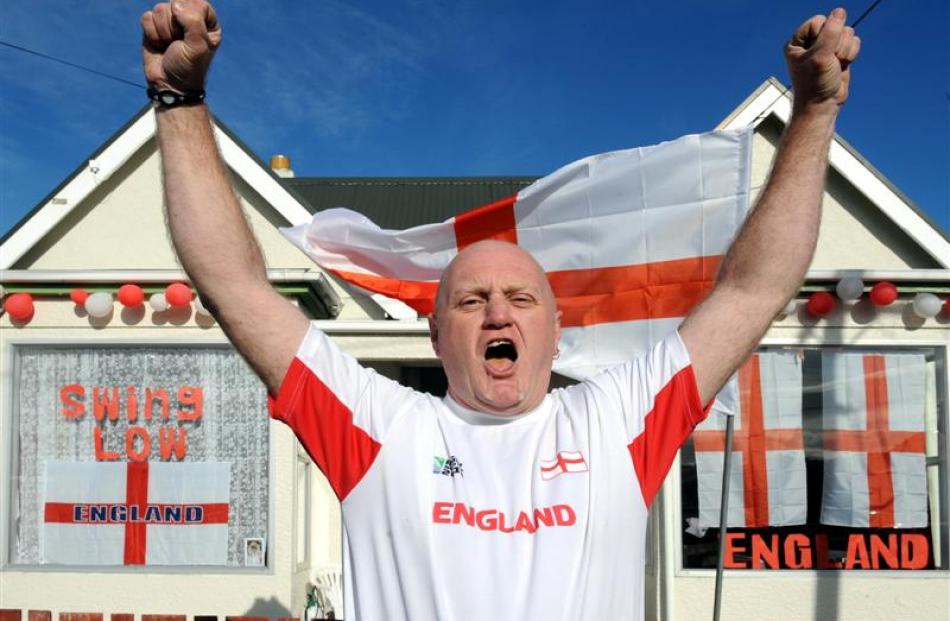 Brit Adam Morton urges others in Dunedin to show their true colours, or any colours at all, as Rugby World Cup fever gathers pace. Photo by Debbie Porteous.

Expat Englishman Adam Morton has gone several better than just flying an English flag ahead of the Rugby World Cup - he has hung them all over his Dunedin villa.

The Manchester native has attached balloons to the roof and sizeable flags on the windows of his Young St, St Kilda, house to ensure the cross of St George flies for all to see.

"I'm English and they've got just as good a chance as anyone at the moment, so why not put up some flags?"

The ensigns, he says, are quite the people-pleaser.

Cars slow down while their occupants have a good gawp. Others toot support as they pass.

"I get little old ladies walk past and say, 'Are you from Denmark?' and I say, 'No. England', and then they ask me what's happening in Coronation Street."

He wants everyone in his street to decorate their houses, and if they don't support a particular team, he reckons they should just choose one and go for it.

Mr Morton moved from England to Dunedin to be with his Kiwi partner eight years ago. He is a self-confessed rugby nut, having switched codes as a child to avoid beatings from his four older football-mad brothers, evenly divided over which Manchester team they supported.

"I thought rugby might be be safer," he explained.

He was very excited about the England games in Dunedin and would be at the airport to see the England team arrive tomorrow.

"I've got Swing Low, Sweet Chariot on disc and I'll be blaring it out," Mr Morton said.

He was looking forward to seeing fellow England fans converge on New Zealand and Dunedin, including friends coming for the tournament.

Mr Morton's money was on an England win and, failing that, a New Zealand victory.

"As long as the Aussies don't win, I'm not bothered," he said.