Good for a laugh and good for you 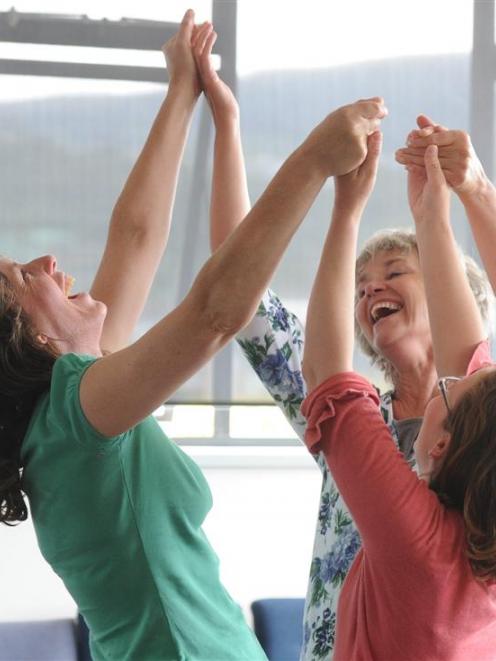 Dunedin Laughter Yoga Club members (clockwise from left) Christine Ogilvy (49) Anneloes de Groot (58) and Hannah Sinclair (33) share a laugh at Otago Polytechnic in Dunedin.
If laughter is the best medicine can forced laughter be determined as a dose?

She was a ''laughter leader'' and facilitated the laughter and restricted class lengths to 45 minutes, for safety reasons, she said.

''You can have hysterical laughter and it can be dangerous to laugh too hard. It is like anything. If you were intensely sprinting for 45 minutes you'd start to have a stress response.''

But all laughter was beneficial because it reduced stress, released emotional tension, increased self-confidence, strengthened the immune system, released endorphins and increased circulation, she said.

''You have the exact same response if you do fake laughter, as opposed to real laughter, because all the oxygen coming in, all the cardio coming in, is just the same. We are trying to have natural laughter that is unforced but the body can't tell the difference between fake and real laughter, as long as your intentions are to just laugh.''

Laughter was a learned response and fake laughter turned into real laughter, she said.

''Start off with fake laughter, if you need to, and it will turn into real laughter very, very quickly because everyone's walking around being stupid . . . it's the physiological principal, where if someone smiles at you, then you smile back at them, and by making eye contact and moving around, you'll start to have natural laughter.'' He had been performing music-based comedy to crowds since 2000 and his parody tunes included I smoked all your Port Royal to the tune of Dave Dobbyn's Loyal.

''I started out with a couple of songs and was chucked into comedy with no stand-up material.''

His friends pushed him into comedy because of his Billy T James-like giggle. To ensure he could giggle on cue, he sat in front of a video camera and forced himself to laugh, he said.

However, the audience could make out the difference between a good and a bad gig and a heckler could ruin it, like a woman in Dunedin nearly did, he said.

The woman heckled until she was silenced by another audience member, he said.

''The guy goes 'look, you're being too noisy and rude. If you want to keep talking, then go outside' and the crowd erupted in applause.''

A comedian could ''lose an audience'' if they scolded a heckler, but it was OK for a fellow audience member, he said.

After the scolding, the woman was quiet and apologised after the show, he said.

''She said 'I just thought I'd make your show more interesting'.

''She started heckling five minutes in.