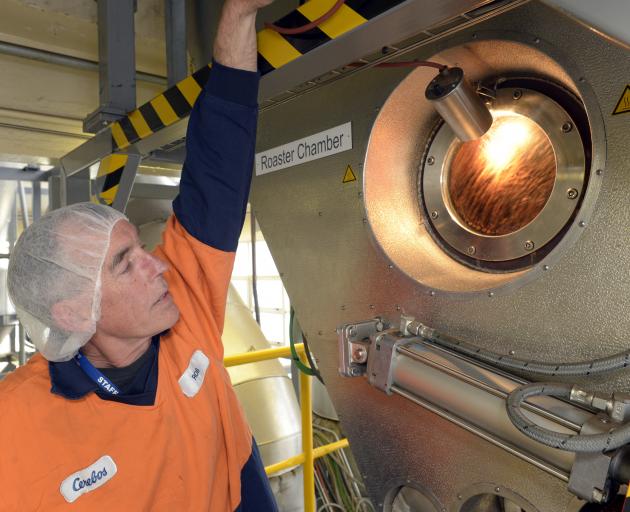 Roaster operator Rob Finch works his machine at the Cerebos Gregg's factory in Dunedin yesterday. Photo by Gerard O'Brien.
Cerebos Gregg's yesterday celebrated the completion of a $20 million investment in its Dunedin plant in Forth St.

The investment over the past two and a-half years has paid for manufacturing upgrades including new production lines, a warehouse extension, improvements to environmental compliance, a new staff car park, staff facilities and an open plan main office.

Australian-based chief executive Terry Svenson said the investment in the plant that supplied coffee throughout New Zealand meant production would continue on the site where coffee had been made since 1869.

The company first announced it would pump money into the expansion of its Dunedin-based coffee factory and close its East Tamaki, Auckland, manufacturing plant in 2014.

At the time, there were 40 jobs in Forth St. Yesterday, Mr Svenson said there were now 56.

That was despite investment in a robot and automated packing units that reduced the need for human input in production.

Ms Fraser said there had not been a decline in demand for instant coffee in New Zealand, despite the rising number of cafes and the demand for fresh coffee.

She said while employees were no longer needed for packing, some had retrained as machine operators.

At a plaque unveiling, Mayor Dave Cull said the Dunedin City Council had supported the company's investment in Dunedin by helping smooth the path of heritage, building control and regulatory issues.

A council team had worked with the company to ''red-carpet'' it though the process.