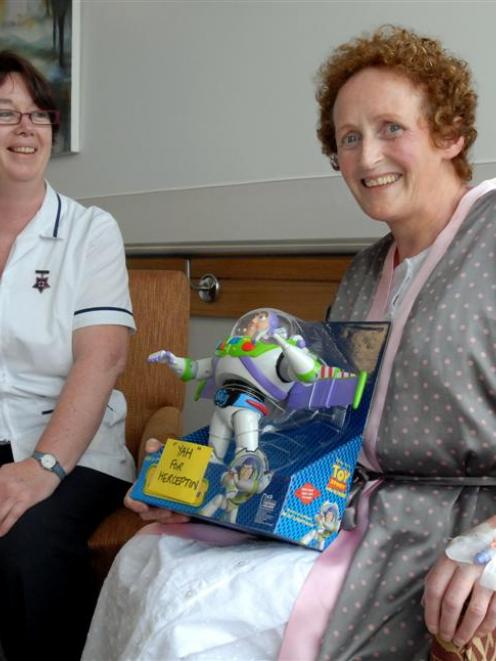 Not only has Dr Sue Walthert (right) seen her Herceptin campaign succeed and been given the New Zealand Doctor magazine "Buzz Lightyear Award" for her efforts, today she leaves Mercy Hospital "trusting" she is cancer-free.Dr Walthert chats to staff nurse Mary Carney. Photo by Gregor Richardson.
Herceptin campaigner Dr Sue Walthert is "over the moon" about the Government's decision to fund 12-month courses of the breast cancer drug, even though she and her family will not benefit.

Dr Walthert spent $48,000 paying for the drug beyond the nine weeks of government funding.

But, because she finished her 12-month course in September, she will not qualify to have any money reimbursed.

"It's been very, very hard and there's a little seed of `Why not me or my family?'" It's my family that's suffered.

''It's my family that don't have that money.

But from her Mercy Hospital bed last night, Dr Walthert described the decision as "fantastic".

Asked if she could recognise the benefits of Herceptin in her recovery, Dr Walthert said all she could do was trust she was cancer-free.

"I think, for me, the most important part of taking 12 months of Herceptin is the reassurance that I was doing the best I could."

Dr Walthert had a reservation about the funding arrangement for those who wanted to resume taking the drug having already completed the nine-week course.

"Most of what I have heard . . . Herceptin [needs] to be done in a kind of steady treatment, one following the other, without a big break in between."

Prime Minister John Key said women who had already completed the nine-week course could see their specialist about getting a 12-month course, but Dr Walthert wondered if oncologists would be willing, given a lack of research on the effects of a break in treatment.

Queenstown Herceptin campaigner Basil Walker described the decision as "admirable" and the decision to backdate payments to when the Government was sworn in "will have a major positive influence on some New Zealand families".