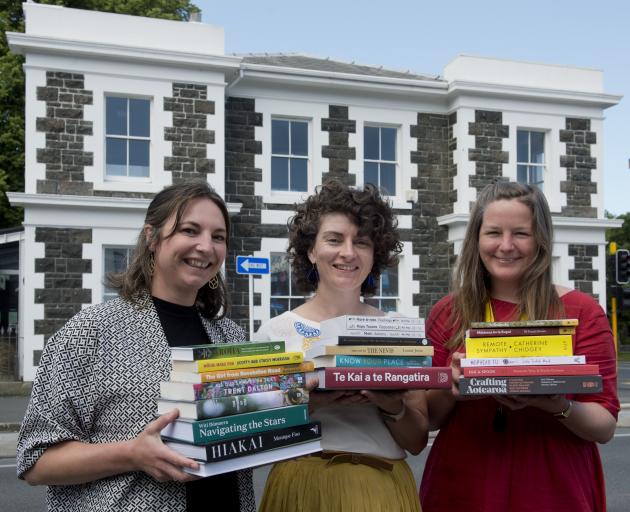 University Book Shop staff members (from left) Rosie Hill, Charlotte McKay and Rebekah Clements will be helping move the shop's books across Great King St to the former North Dunedin Post Office when the book shop takes up its new home away from home at the end of the month. PHOTO: GERARD O'BRIEN
A stockpile of cardboard boxes awaits 38,000 books as staff at a landmark Dunedin bookshop prepare to pack up and move into a temporary home this month.

After more than four decades in its present location, the Otago University Students' Association-owned University Book Shop is vacating its soon-to-be-upgraded Great King St premises, but it will not move far.

University Book Shop senior bookseller Rebekah Clements said she was pleased the shop — along with its NZ Post operation — was moving just across the street to the Otago Museum-owned HD Skinner Annex.

She noted the happy coincidence the building was originally built as the Dunedin North Post Office in 1879.

"I think it’s going to be fantastic, I really do," Ms Clements said.

"I’m excited to be in the new building and I’m excited for this building to have a little polish applied to it."

University Book Shop general manager Phillippa Duffy said the move would be carried out in a way that minimised disruption.

The present location was hoped to be open until January 22 before the bookshop reopened in the Annex on January 25.

The bookshop’s present building was built in 1910 as the Romison Confectionery Works and was designed by Edmund Anscombe, who also designed Otago Girls’ High School, Marama Hall and the University Archway building.

Its long-planned upgrade, and the bookshop’s consequent relocation, was expected to take about a year, she said.

The bookshop and the museum collaborated regularly, including when the two organisations worked on combined book talks and launches, Otago Museum marketing manager Kate Oktay said.

"It will be great to have them just across the reserve from us, and we are looking forward to more collaborations with them over the course of the year," she said.