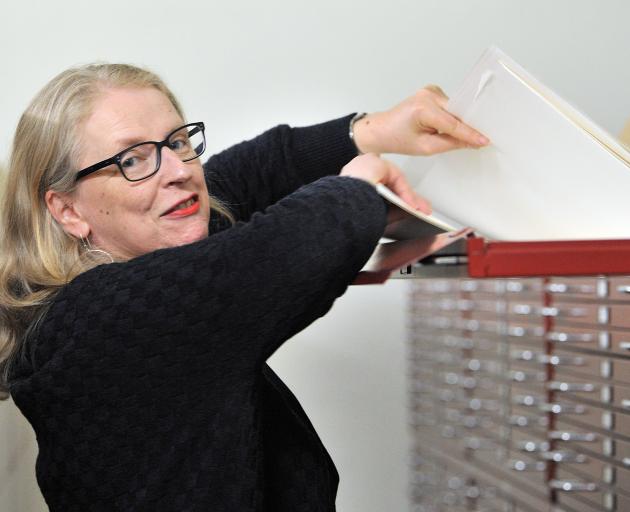 Hocken Library archives head curator Anna Blackman peruses the Salmond Architects Collection. PHOTO: CHRISTINE O'CONNOR
The Hocken Library is still accepting donations, despite a growing lack of space - but archivists will now be assessing material before people bring it in.

The University of Otago is investigating options for the long-term future of the library, part of a network of documentary heritage collections which covers the whole country.

"We strongly welcome the contact from the public and their requests for us to hold and secure their archives for future research and display."

Rather than turning up in person and without notice, Ms Dell said the Hocken was asking people to phone ahead so the library's archivists could come and assess the material.

Hocken floor space is now at capacity, but shelving was still being extended vertically - and the building housed "26,000 linear metres" of collections.

"There are mobile shelving units being used to extend space vertically, although these shelves are now very high," Ms Dell said.

The collections documented what was happening in society - and if collection stopped, people looking back did not have the evidence they needed to understand what might have happened at any given time in history.

"We have made plans to use the current building footprint more effectively, and the university is investigating longer term options to cater to growth of the Hocken.

"However, the university is not yet in a position to be able to announce any longer term plan," she said.

The largest collection acquired since 2009 is the Salmond Architects Collection, including thousands of plans - many of which were excellent examples of architectural drawing, Ms Dell said.

"This collection is highly significant and documents many of Dunedin's iconic buildings, including some within the university and added to the Unesco memory of the World Register in 2017, and regularly used by researchers."

Any plan for the future would include increased digitisation of files, and increasing space, she said.

Further details of options were unavailable.