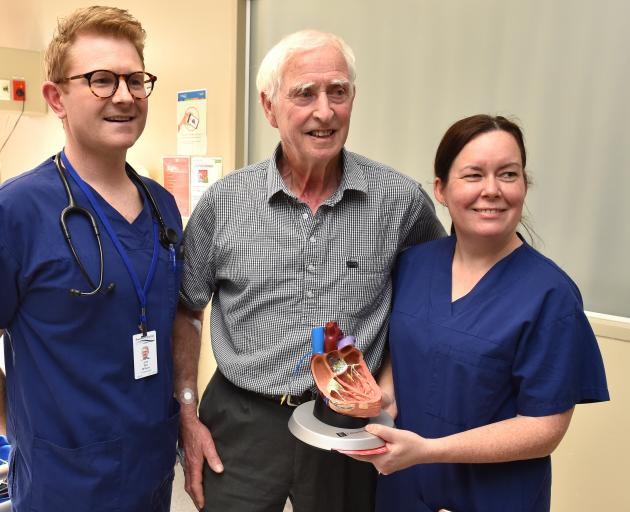 Semi-retired East Taieri farmer John Parks (78) talks to Dunedin Hospital cardiologists Dr Ben Wilkins and Anouska Moynagh, after a heart valve procedure under local anaesthetic. Mr Parks is the 100th patient to have undergone the procedure in the South. PHOTO: GREGOR RICHARDSON
John Parks was well aware that his discharge from Dunedin Hospital yesterday, after a heart valve replacement, was much quicker than usual.

However, Mr Parks was more surprised to learn he was the 100th patient to undergo a new catheter-based procedure conducted under local anaesthetic at the Southern District Health Board.

Through this procedure, first offered at the SDHB in 2015, a replacement aortic heart valve is inserted without removing the old damaged one and without traditional chest surgery.

"I’m not going to be in my 20s or 30s," the semi-retired East Taieri farmer joked about the outcome yesterday.

Nevertheless, he hoped to return to his previous good health and physical activity level before a heart attack and an earlier operation about 15 months ago.

"It’s pretty amazing really," Mr Parks said about new procedure, which had avoided not only chest surgery, but also a stay in the hospital’s intensive care unit and a lengthy convalescence.

It was good to be walking out of hospital, less than 24 hours after the procedure.

As to being the 100th SDHB TAVI patient, he did not feel "particularly sentimental about it", but the record reflected well on the success of the cardiac services team involved.

He was also impressed by the high level of care he had received and the clear way options had been discussed with him.

"Once the new valve is deployed, it pushes the old valve leaflets out of the way and the tissue in the replacement valve takes over the job of regulating blood flow," she said.

"TAVI results in a shorter hospital stay, typically less than 24 hours, and a faster recovery," she said.

Cardiologists have pointed out that the TAVI procedure did not replace surgery, but supplemented it in select patients.

About 25 of the new procedures had been performed at the SDHB this year — higher than previously— and numbers were expected to rise further.

Dr Wilkins said the development of the TAVI procedure throughout the world was one of the most exciting developments in cardiac services in the past 15 years.