Hotere triptych back in all its glory 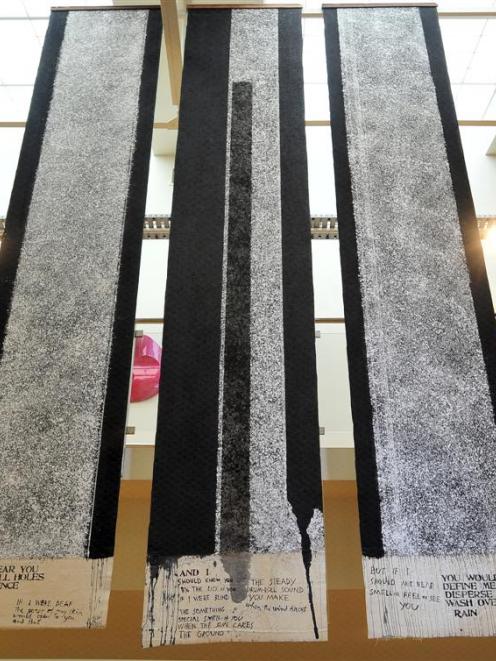 The 5m long triptych Rain, by Ralph Hotere, was installed in the Hocken Library foyer after a lengthy restoration project.

The work was inspired by the poem Rain, by late Kaka Point poet Hone Tuwhare, who was a close friend of Hotere's.

The work was commissioned by the university in 1979 and hung in the former Hocken Library, now known as the Richardson Building, for nearly 30 years.

It was taken down in 2007 for restoration by Auckland conservator Lydia Gutierrez.

"It turned out to be in worse condition than we originally thought," Hocken pictorial collections curator Natalie Poland said yesterday.

"It was like a wind tunnel in the Richardson Building and it flapped about, which weakened the bottom of the canvases.

"There were also wires across the face of them, which caused some paint loss where the wires had touched them," she said.

"The binder had disintegrated, so the paint was like powder.

"We were careful not to overdo anything. We only retouched where there was paint loss. We just stabilised the work. We haven't enhanced it in any way."

The restoration of the three canvases, which Hotere seasoned by leaving them outside in the rain, included encasing them in 70kg of perspex.

"You can get up and close to it now and see it from the back, which is quite interesting. The canvas was unprimed, so the thinner paint comes through it," Ms Poland said.

"There was a wine ring on one, which we had a bit of a discussion about and decided Ralph must have made that while he was making it."

Rain will be on display at the Hocken Library until February, in conjunction with the "Ralph Hotere: Zero to Infinity" retrospective exhibition.

A reproduction of the work will also be installed in the Richardson Building at the end of the year.