Insurance may become harder to get 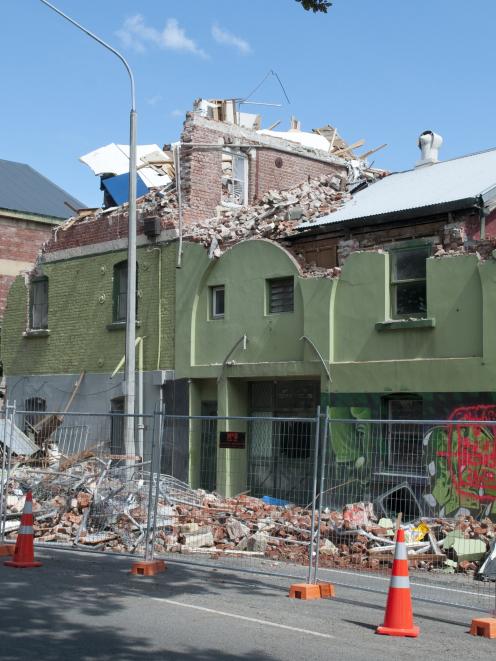 FMR Risk director Howard Fraser, of Dunedin, said commercial buildings built before 1935 would come under close scrutiny from insurance companies, and most might not be able to be insured.

National design standards for buildings to resist earthquakes were introduced in New Zealand in 1935 after the Napier earthquake.

However, a significant proportion of buildings built before 1935, particularly between 1880 and 1930, were constructed using unreinforced masonry.

Insurance companies were now reviewing the risk of these buildings based on their ability to withstand a significant earthquake.

Mr Fraser said depending on the nature of a building, the changes could make it very difficult, if not impossible, to get insurance cover.

It was an issue which could affect more than 100 building owners in Dunedin alone, he said.

"Landlords need to brace themselves for some major changes.

"In the past, it was easy enough to get insurance for a building, as long as you could give details about its age, construction and previous occupancy.

"Now, with the regime we are moving into, insurers are going to toughen up on earthquake coverage. There will be detailed questionnaires to determine the ability of a building to withstand an earthquake. Landlords are going to face a more robust investigation into the nature and construction of their building.

"If you have a pre-1935 building, the insurers will be concentrating on it."

Mr Fraser said if an insurer would not insure a building, it might mean they had concerns about its ability to withstand an earthquake.

Uninsured buildings could be deemed a safety hazard in the event of an earthquake, which could cause considerable financial implications for Dunedin businesses, he said.

Insurance companies had already advised brokers there would be an increase in earthquake premiums, he said.

"It would be a very disappointing response to see insurance companies go down this track."

Mr Christie believed some insurance companies would cover commercial buildings built before 1935, but the premiums would cost the owner significantly more.

Those who could not get insurance cover would legally be able to continue leasing their building, but the owner's ability to attract tenants would be severely affected, he said.

"It's just another cost for businesses which they don't really need right now. Ultimately, that cost will be passed on to the consumer."