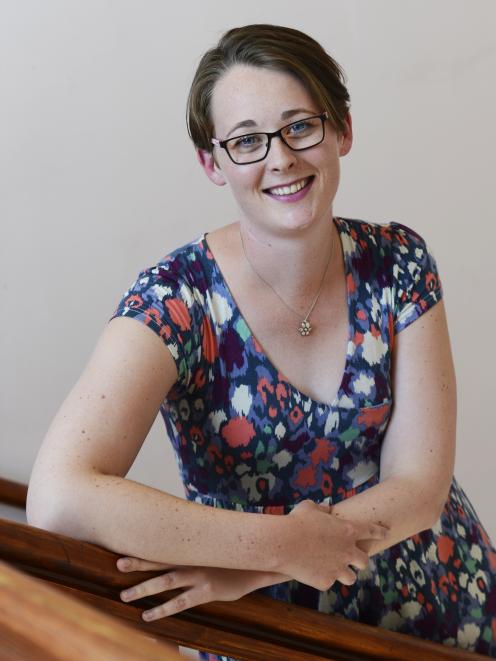 Georgia Andrews wants more public understanding of issues facing intersex people. Photo: Gerard O'Brien
The story of a Belgian model published in the Otago Daily Times has had a big influence on a girl from Waipiata.

It helped her begin discussions with family and friends and "come out" as intersex in April.

She has since begun working as an advocate for intersex people, and says there is plenty the medical establishment can learn about the issue.

Miss Andrews (25) grew up in the Maniototo, where her parents are sheep and beef farmers.

She moved to Dunedin to complete a bachelor of teaching degree at the University of Otago, graduating in 2013.

She stayed in the city, where she is a community support worker, working with young people with disabilities.

It was during her time at boarding school in Timaru her intersex status came to the fore.

As a 16-year-old, she had persistent migraine headaches doctors initially thought were the result of a brain tumour.

Tests were inconclusive, as were tests for epilepsy.

"They ran some blood tests that revealed I have an intersex variation."

Intersex, she said, was an umbrella term for people born with one or more of a range of variations in sex characteristics outside "traditional conceptions of male or female bodies".

That could mean variations in chromosomes, genitals or internal organs.

It was different from transgender, where people  with typical anatomies  felt they had been  born in the wrong body.

"When I was diagnosed with my intersex variation, as a family, we were told I would probably not meet anyone else in New Zealand, let alone overseas, with my variation.

"We were encouraged not to discuss it with wider family or friends. We were basically under the impression I had this exceptionally rare medical variation, and there was shame associated with that.

"There were no counselling support services offered when I was diagnosed. I was made to feel very isolated."

For Miss Andrews, the diagnosis was she was infertile, and had male XY chromosomes, despite having "relatively typical female anatomy".

"I have XY, with a gene on my Y chromosome that’s deleted."

She had surgery to remove "streak tissue" which had formed in place of ovaries.

That included medical practitioners, who when told of her variation "looked completely bamboozled".

She was concerned "informed consent" was not necessarily a factor when it came to surgery or medication in intersex cases.

When operating on an intersex infant to provide "normal" sexual organs, for instance, there could be implications.

"A lot of surgeries are for cosmetic purposes."

Asked what parents should do in such situations, Miss Andrews said people needed time to read about an issue, process the information or access counselling.

Medical professionals needed to work with people to give them a better idea of the physical and psychological implications of the diagnosis and surgery.

She also wanted to visit  universities, polytechnics and schools to speak to educators about the issue.

Since the article was published she had attended a conference in Arizona, US,  where she met  Hanne Gaby Odiele.

Miss Andrews  is now co-chairwoman of Intersex Awareness New Zealand, and project manager for Intersex Youth Aotearoa, and said there was plenty of work to do.

Those without the capacity to find support services could not find peer support, something essential for people.

There needed to be more funding for intersex people, rather than relying on grant funding to provide support "so they know that they’re not alone".

"It took me seven years before I was able to tell my immediate family and friends I was intersex," but they were "fantastic" about it.

I think this person makes a great deal and concern over little. She is a women enjoy life. Another doctor run tests and say different. be happy don't think yourself away.

Good positive advice about over thinking. But, if the condition is organic, gender is a determinist process, not chosen. The evidential causes of Intersex are not in dispute, unless medical science, rather than opinion, is disputed.

In this regard, the Intersex is not Woman, or Man, but happy to be a third 'gender'. If someone had 'assigned' gender, they would have been unhappy. This is personal choice, affecting nobody else, except, perhaps, our need to understand and accept the decision.

I think you are maybe getting confused here about transgender, intersex and gender identity. I live with Georgia. She identifies as an intersex woman. Her chromosomes are what we commonly assign to males (XY). No other doctor is going to "run tests and say different", just the same as when you have any other medical condition. Her "great deal and concern" are about the rights of people with intersex conditions to receive appropriate medical information and support, and to provide informed consent before undergoing treatment, including surgery. Just the same as if you were diagnosed with cancer or some other condition - you have to right to be informed. Many people with an intersex condition will undergo some kind of surgery, often unnecessarily, and require ongoing (lifetime) hormone treatment, so there are ongoing medical issues to consider, as well as the emotional concerns - for example finding out at a young age you can never have children. And for the record, Georgia enjoys her life greatly and is a very happy person, despite random strangers on the internet giving advice about that.

Lisa J: Respect. Good. Thing about online is the debate. No one can have the definitive word on anything, except the individual whose life it is.

I think there is justifiable reader concern at the hormonal and chromosomal problems and surgical procedure encountered (and overcome) by this young woman. Clearly, Ruth wished to share her experience to help others.

Random strangers commenting is the ODT online model of practice. You can ask for no comment thread to be attached to any story involving personal experience.