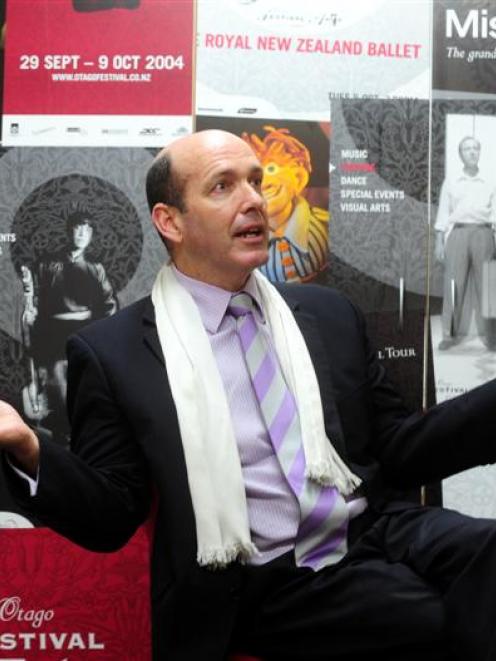 "I'm hanging up my hat. Enough is enough and enough is now," he said yesterday.

"I've been doing it for 12 years and that's long enough for anybody. It's time for someone else to have a go and give it a fresh appeal and a new start."

Mr McBryde (53) was the founding director when the biennial festival was launched in 2000.

"I'm going to do a mature OE with my wife, Rosemary.

"We've got a year and a-half window and our children [Angus (20) and Brendan (18)] have given us the all-clear to go and have our little adventure."

"There's a lot of stress and anxiety involved.

"It's a two-year cycle and you just do whatever it takes to make it happen. You start with a blank canvas and you've got 10 days to fill up with shows. Where do you start? That's quite scary."

A source of pride to Mr McBryde was that the festival had never run at a loss.

"The audience has learned to trust what's in the festival and that's a sense of real satisfaction to me. It shows that what we've put on is what people enjoy and it works. The festival has a great reputation for being visually exciting, robust and financially secure.

"But the real sense of satisfaction, for me, is a house - an audience - coming out smiling."

Mr McBryde's swansong will be the 2010 festival, which runs from October 8 to 17. The programme will be launched on August 13.

"I'm going to finish this festival and run the cycle through till March. We'll go over to the UK in May or June and then come back to live in Dunedin in a couple of years. And then what? That's the tricky bit.

"But I arrived here in 1998 with no job and called myself an 'arts consultant' and look what's happened."