It's not how, it's where they are drinking 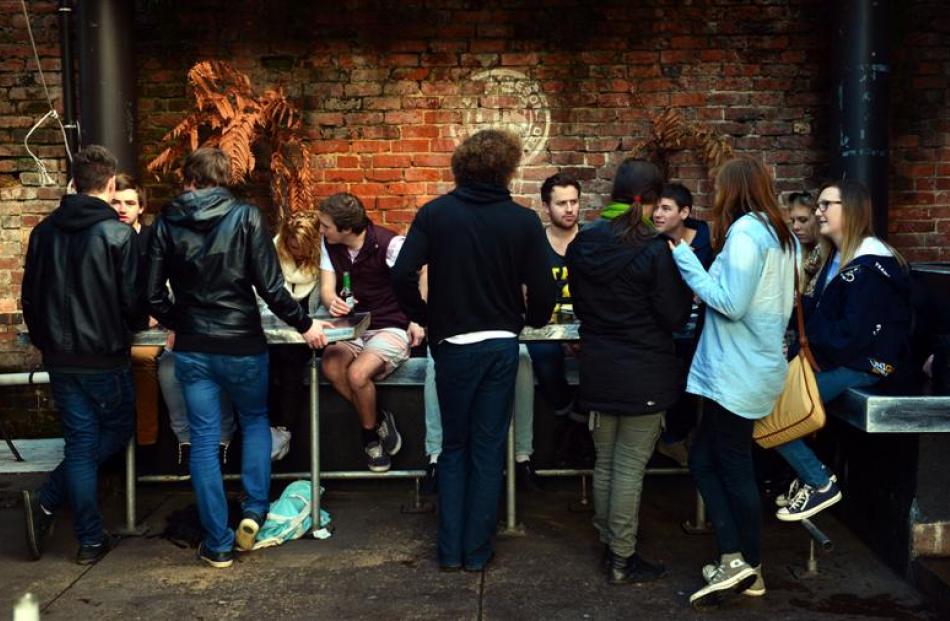 With the Captain Cook Tavern following the lead of other student pubs in North Dunedin and shutting its doors, Otago Daily Times reporter Vaughan Elder takes a look at how student drinking patterns have changed over the past few decades.

No-one is suggesting hotels in Dunedin have closed because students are no longer drinking.

Of the main student pubs in the city, only the Oriental, now called Starters Bar, remains. People spoken to by the Otago Daily Times said the closures were symptomatic of a change in drinking habits. Students are buying their alcohol from liquor stores and supermarkets and ''pre-loading'', instead of drinking at the pub, as they did in the past.

Hospitality New Zealand Otago president Mark Scully said this change had come about due to a ''growing gap'' between the cost of buying a drink at a bar and off-licence premises.

''When I was a student, the choice of drinking at home or drinking in a bar, it wasn't a huge differential in terms of money, but now it is.''

Students were now drinking in unsupervised environments, such as in flats or on the street, which had the potential to lead to more problems.

''At the end of the day, the safest place for an 18-year-old to drink is in licensed premises, with a sober manager, some doormen [and] non-alcoholic beverages available.''

The change in student drinking habits had made life ''impossible'' for the owners of student pubs in North Dunedin and was the reason almost all of them had closed.

''[The reason is] not actually the university coming in and buying them up to close them down and rid themselves of the `evil liquor','' he said.

It had also made life more difficult for bars outside North Dunedin. Students and other young people were often doing most of their drinking at home and only ''topping up'' when they reached town.

Bars often also inherited problematic patrons who were intoxicated before they arrived.

''It can reflect badly for their business. Some guy pre-loads at home, gets past the doorman because he's not in too bad of a nick still, but half an hour later, the half bottle of vodka he's drunk starts to kick in,'' he said.

The change in drinking habits also meant people were coming into town later, which meant pubs were staying open later, adding to their operating costs.

''We have got this big hollow in our hospitality now. If you go to the Octagon at 8pm or 9pm at night, unless people are finishing a meal, it's almost dead time.

''It's added a lot of extra cost to the hospitality industry, because you have to have your place warm and open and staffed for longer,'' he said.

It was unfair to blame students for ''pre-loading'', as the price difference made doing so an obvious decision.

''Students are traditionally short of money and they are clever, so they work it out. If there is a deal to be had, the students are on to it,'' he said.

Instead, the Government needed to do something to address the growing price gap to try to get more students drinking in pubs rather than in unsupervised environments.

''If you want to keep the hospitality, bar and restaurant culture alive in New Zealand, they have to address the ever-growing gap between off and on-licence premises.''

''I was at varsity in the late 1980s. Certainly, there was an established drinking culture then. The salient thing for me that has changed since then is, comparatively, pubs were cheaper,'' he said.

''While students definitely still had parties ... lots of people would drink in a more social way in pubs, and it didn't cost half your bloody income to buy two or three jugs.''

It was not uncommon in the late 1980s for students to drink until they ''puked up'', but he did not believe there were quite as many ''extreme cases'' where students ended up in hospital because they had drunk so much. Again, this could be linked to students drinking in unsupervised environments. He agreed with Mr Scully that the Government needed to do more to encourage students to drink in pubs.

However, for student drinking habits to change to any large degree, there needed to be wider societal shift.

''The whole country does have a lax attitude on excessive drinking and that needs to change before students or young people change.''

University of Otago Preventive and Social Medicine head Prof Jennie Connor, who is the chairwoman of a university group set up to tackle problem drinking, said students were drinking more heavily than they did 10 years ago.

''In the last 10 years, there has been an increase in how much they drink and the frequency of heavy episodes of drinking.''

''A larger proportion of all students drink and drink heavily. Not just at Otago but at all universities, and probably in the general population of young people,'' she said.

The main driver of the change in drinking culture was the introduction of wine and beer sales in supermarkets and the lowering of the purchase age from 20 to 18.

''A whole new drinking culture has grown up around heavy drinking outside of a pub environment,'' he said.

She was not quite so enthusiastic about getting more students to drink in pubs, but accepted there were more ''social aspects'' that came with that.

''There is no evidence that drinking in pubs is safer, and most assaults that happen outside the home happen near pubs - the violence is usually outside rather than inside, when intoxicated people who don't know each other mix together. 'Supervision' by pub staff is usually minimal at best,'' she said.