The crowd was a little less than usual but the Cadbury Jaffa Race raised $73,000 for local charities on Saturday.

The event was the first since it was confirmed the Cadbury factory in Dunedin would close early next year, putting hundreds of people out of work.

It also had to be postponed from its usual July date because of bad weather that caused flooding in Otago.

But a good crowd still turned out to enjoy the annual race.

Event manager Kylie Ruwhiu-Karawana said the weather had been "threatening to turn" all week, so she was pleased it was held in sunny conditions. 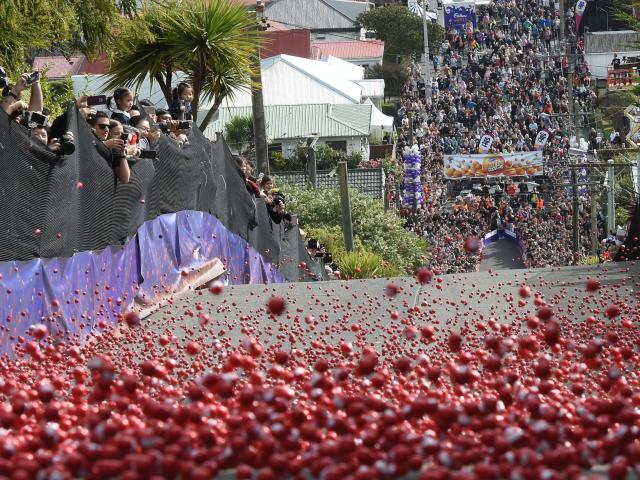 Jaffas bound and skip down Baldwin St during the 2017 Cadbury Jaffa Race. Photo: Gregor Richardson.
"Everyone seemed to be having an enjoyable afternoon."

Surf life-savers, one of the three charities to benefit from the day, got some good fitness training, sweeping away the Jaffas after each race, before climbing back up the world’s steepest street for the next race.

Ms Ruwhiu-Karawana said the life-savers had performed "the fastest sweep that’s ever been done" at the event.

She said the event was usually held during school holidays and it was also run this year on a Saturday when there were other things on, including sports events and a graduation ceremony.

This year’s races were run as fundraisers for Make-a-Wish, Surf Life Saving New Zealand and the Parents Centre. Up to 25,000 jaffas were rolled in each race.

Both junior and senior members from clubs in Otago and Southland had been involved during the race.

"It’s awesome to see everyone helping out."