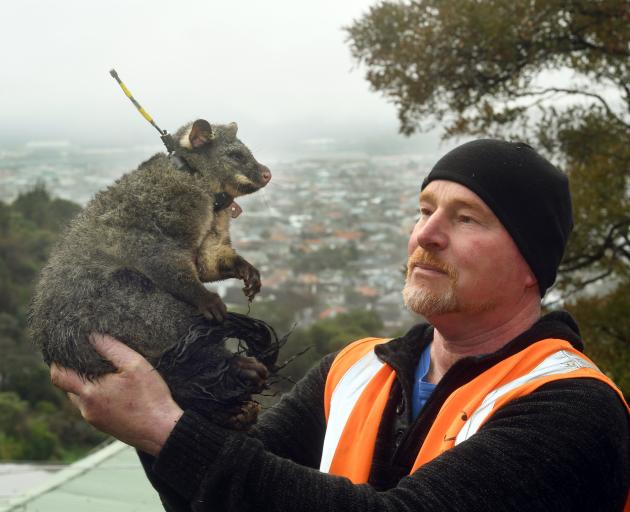 Andy Kinley prepares to release a sedated possum in St Clair after fitting it with a GPS tracking collar. PHOTO: STEPHEN JAQUIERY
City-dwelling possums are being captured and released back into Dunedin backyards as researchers track the pests to improve trapping effectiveness.

Landcare Research scientists in collaboration with Predator Free Dunedin are fitting possums with GPS collars and setting them free to understand their movements around some city suburbs.

Landcare Research ecologist Dr Deb Wilson said the study was focused on predator management and the effectiveness of trapping programmes.

But in part the study would reveal how the pest species used the city, Dr Wilson said.

Possums might use roads, fencelines, or in St Clair, where trapping began this month, Jacobs Ladder, to move about.

"We think the behaviour of possums in urban areas is probably different from in the wild, because the habitat structure is different, and there are roads, and people, and there’s different food available,’’ Dr Wilson said.

"If we need to control them, we need to understand [the answers to these questions], ‘What is their behaviour, what is their ecology, in urban places?’."

Over eight days this month, as the field work began, the researchers trapped, sedated, and then equipped the first eight possums in the study with tracking collars.

The possums were caught in two clusters of 29 live capture traps in St Clair.

The team had 30 GPS collars to attach and trapping had now moved to Andersons Bay, Dr Wilson said.

Researchers would soon enter the field to locate collared possums and download the GPS information about their movements, Dr Wilson said.

This would help to build a picture of each animal’s range, typically of a few hectares, and guide where traps ought to be set.

But the collars were also equipped with something that looked like a short antenna.

The markings on the aerial were used to identify individuals when they appeared on trail cameras near the traps.

The live capture traps used at the moment would eventually be dropped in favour of kill traps, modified to make them inactive, Dr Wilson said.

The traps would be paired with cameras so that researchers could watch how possums behaved when they encountered the traps.

The study was focused on suburbs with forest patches and gullies where possums were known to live, but researchers were avoiding the northern end of Dunedin where Predator Free Dunedin was working to remove the introduced mammals, Dr Wilson said.

Possums have a significant impact on many of New Zealand’s natural ecosystems, competing with native birds and reptiles for food.

How can they claim to be doing a scientific research when they have an initial perspective that possums "eat young birds and bird eggs" ie carnivores ? They are definitely herbivores, so something is completely wrong here. Science being misused at its worst. Oh dear what a sad world we are heading towards.