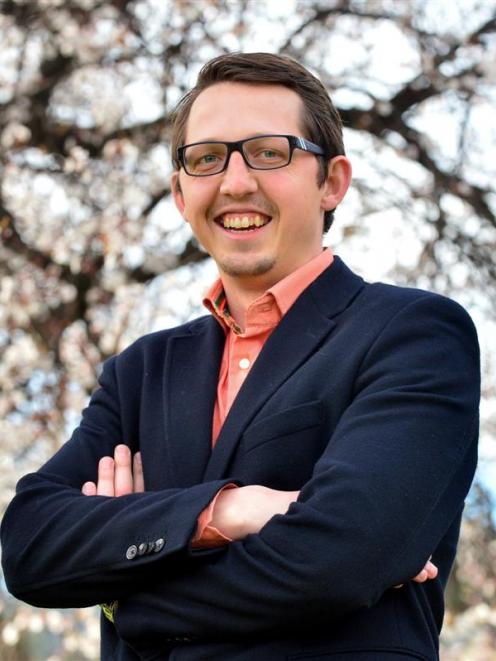 When it comes to travelling to work, Mark Berryman has a longer commute than most.

Every Thursday, Mr Berryman (26) flies from Dunedin to Auckland for two days, usually for back-to-back meetings, as he oversees the running of his building firm, Selah Renovations.

He founded the company when he was 20, after completing his carpentry apprenticeship.

Nearly six years on, it now employs more than 30 staff, as well as contractors. It was 15th in the Deloitte Fast 50 last year.

The young businessman, who is now studying towards an MBA at the University of Otago, was recently awarded the 2013 Upstart Director Award and will spend 12 months on the board of the business incubator.

He was enjoying his first taste of being a university student, having previously left secondary school and immediately started his building apprenticeship.

After deciding that he was keen to have his own building firm, he started with an apprentice and then engaged a business coach ''to learn about business''.

The company sat ''in a bit of a niche'', doing design and build packages for extensions and renovations, and employing its own sales people, designers, builders and project managers.

Last year, Mr Berryman's wife Liz, a nurse, who has always wanted to become a doctor, decided to study medicine in Dunedin.

This year, the couple bought a house on the Otago Peninsula and have become happily immersed in the Dunedin lifestyle, which Mr Berryman said was ''far better'' than Auckland's.

Their home, overlooking the harbour, would have ''cost millions'' in Auckland and so it was a ''bit of a treat'' to have some of the luxuries they would not have afforded up north.

But he also observed the Dunedin economy was at a ''defining crossroads''. If the proposed $100 million waterfront hotel in the city happened - it is currently before the Environment Court, having been rejected by the Dunedin City Council's hearings committee - then he believed that would lead the way for lots of other developments to happen and both the economy and Dunedin would grow.

However, if it did not happen, he feared that no-one else would want to take on further development in the city.

Mr Berryman was studying part time towards his MBA ''because obviously I've got everything else to juggle'' but he was enjoying learning ''a bit more about business in the world''.

He was also looking forward to his involvement with Upstart and getting more involved with the Dunedin business community.

He had a passion for business and, in the future, he was keen to sit on the boards of other companies.

When it came to running a business from a distance, Mr Berryman said technology was a key part of it, along with ''good people''.

''You've got to have people you trust. I'm like that Y-generation manager, I don't really care how people do it, as long as the job gets done,'' he said.

While he wished that he could sometimes be among clients more, and also be more hands-on among the staff, ''every company's got challenges to face - those are mine'', he said.

With so many ''things in the air'', Mr Berryman said he had to make sure he did not burn out and he had learned how to delegate.

The growth of Selah Renovations had been ''quite fast'' and there was a very tough balancing act between growing quickly ''and not falling over''.

He attributed his success to passion and hard work, which had often involved working 70-hour weeks.

There were times when he thought it was ''too hard'' but persevered.

''You can give up, but giving up doesn't achieve much, does it?'' he said.

The company was selected as builders for one of the couples on the second season of TV3 renovation reality show The Block NZ , being filmed in Auckland.

Mr Berryman wanted to keep growing the company and he was ''sussing out'' the Dunedin market, which was different from Auckland. It was possible that he could bring Selah Renovations to the city ''if I can find the right people to work with''.

Ideally, he hoped to eventually take it national, employing between about 100 and 200 staff, but he was in no rush. ''It takes time to get there. You can't rush there too quickly,'' he said.

He and his wife also hoped to use their skills to help overseas with aid work, and to also contribute financially to development.