Little Ted found without his head 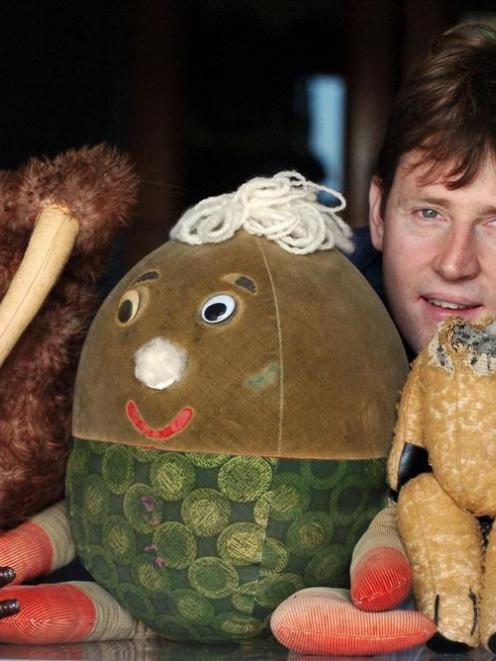 Here is Little Ted, minus his head, with fellow cast member Grubber the Kiwi and Humpty's cousin Harry with Otago Settlers Museum curator Peter Reid. Photo by Gerard O'Brien.
The mystery of the whereabouts of a New Zealand television star has been solved.

Little Ted, of Play School fame, is in the Otago Settlers Museum in Dunedin - minus his head.

His fate was questioned recently after the Play School clock was discovered in the Invercargill Public Library.

Other cast members Manu, Big Ted, Jemima and Humpty are at Te Papa, in Wellington.

The popular children's show was first filmed in Dunedin in 1975.

Joining him on display was Grubber the Kiwi, a late addition to the show, and Humpty's cousin Harry, from the country.

They were classed as "secret treasures" of the museum's vast collection.

Speaking of the somewhat charred body of the bear, Mr Read said "they got a bit carried away" during filming of the final show in 1989.

Speaking of the incident in which Little Ted lost his head, former presenter Barry Dorking, now a Dunedin lawyer, said it was a "joke" on the final day of filming which was never intended to go to air.

However, he was not the "cheeky" Ted used most often on the show.

He was an "old Little Ted" which had been around since the show's beginnings.

"What's often forgotten is that the soft toys got a lot of use and had to be replaced," he said.

He did not know where the "real Little Ted", as he called him, was.