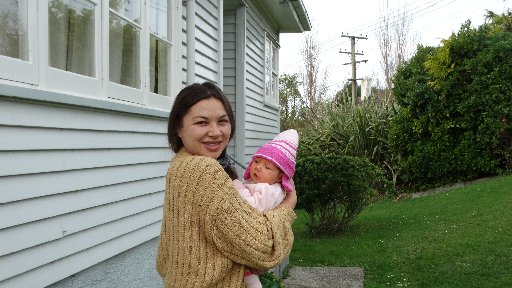 Geane Nelio, with five-week-old daughter Esmakia Smith, is grateful for the quick response of Kainga Ora and contractors at their Andersons Bay house. Photo: Brenda Harwood
A Dunedin mother of a newborn baby has praised the quick action by Kainga Ora and tradies to fix a smelly plumbing emergency during the Covid-19 lockdown.

Kainga Ora tenant Geane Nelio moved into her Andersons Bay home in mid-March, just before the birth of daughter Esmakia Smith on March 30.

Under Alert Level 4 only days before the baby was born, Ms Nelio found sewage had overflowed in her backyard from a blocked pipe.

She was impressed when a plumber arrived just two hours later to assess the problem and clear away the mess.

With tree roots suspected to be causing the blockage, further investigation has been necessary and a second plumber visited last week to run a camera down the drain.

“It looks as though more work will be needed, but in the meantime the problem is fixed, which is a great relief with a newborn baby in the house,” Ms Nelio said.

“Getting help quickly was so helpful, when I was racing against time to get everything set up before my baby arrived.

“And everyone has treated me with respect and kindness, which has been really nice.

“There is a school and a kindy up the road, and the neighbours have been very welcoming.”

The quick service was quite different from previous experiences with private landlords, she said.

“And it’s good to know if anything else breaks down, they will send out the right person for the job.”

Ms Nelio’s plumbing problem was one of 9681 urgent or essential jobs done by contractors on Kainga Ora homes across New Zealand during Alert Level 4 between March 26 and April 27.

In Dunedin, 164 urgent jobs were tackled during the 33-day period.

Kainga Ora national maintenance and upgrade manager Angela Pearce was proud of the hard work that went on during Alert Level 4 to ensure people could “continue to live safe and well in our homes”.

“I’m also extremely grateful to each and every tradie who went to work on essential services during what were undoubtedly uncertain times,” she said.

At Alert Level 2, the work had been able to expand to include most repairs, although Kainga Ora tenants were always asked first if they were happy for the work to go ahead.

The lockdown has been a time of rest and calm for Ms Nelio and her 5-week-old daughter, after a stressful year of housing insecurity.

While on a waiting list for urgent housing with Kainga Ora, she had variously stayed with family and in lodges and motel rooms.

During Esmakia’s birth, Ms Nelio was only able to have the support of her mother and a midwife, although a dentist also attended to drain a tooth abscess while she was in labour.

“It was a very intense experience all round, but we got there in the end.”

While she missed seeing family during lockdown, the resulting quiet time had allowed mother and baby to establish a good routine and to enjoy their new home.

“It feels as though everything has fallen into place. This is a nice house with a new kitchen and bathroom in a very good neighbourhood.”