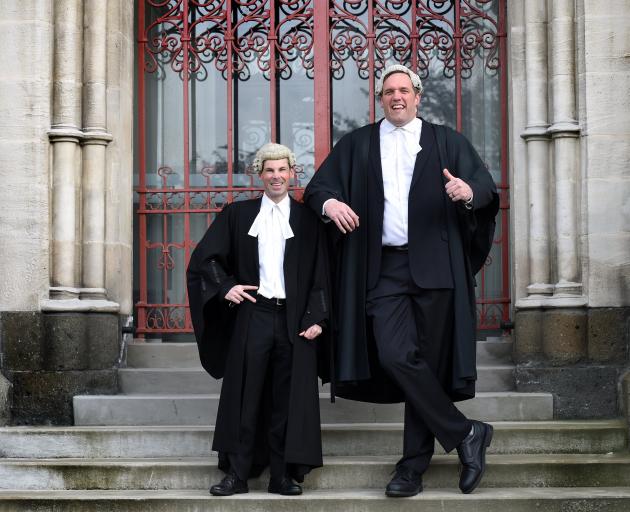 But when lawyer James Collins stooped to get his 2.05m frame through the doorway and join Mr Hambleton, the smiling started, and his image was temporarily shattered.

To keep a long story short, the two lawyers made a rare spectacle of themselves at the High Court in Dunedin yesterday.

Mr Hambleton was the moving counsel for Mr Collins’ admission to the Bar, and to play along with the comic situation, they professed themselves to be "the long and short of the law".

Mr Collins was one of 14 lawyers admitted to the Bar yesterday.

For the 37-year-old, it was not his first Bar admission ceremony.

The American has been practising law for about a decade, and has already been admitted to the Bar in several other jurisdictions, including Washington state, and Guam, where he has practised law more recently.

"So it’s not as momentous an occasion as it is for some of the other people who are just brand new.

"But it was good to have the pomp and ceremony.

"There’s nothing like this in the States, as far as the wigs and the robes go. Not even in the Supreme Court do we do that. It’s a nice tradition."

Mr Collins said he came to Dunedin last year so his wife could study for a PhD at the University of Otago.

To continue his law career in New Zealand, he was assessed by the New Zealand Council of Legal Education, and required to sit a law paper at the University of Otago.

"Then, in February, I took the competency exam for all the other subjects, and I got through that."

Mr Hambleton was full of praise for the newly admitted lawyer.

"Pardon the pun, but he’s head and shoulders above a lot of lawyers here in town."