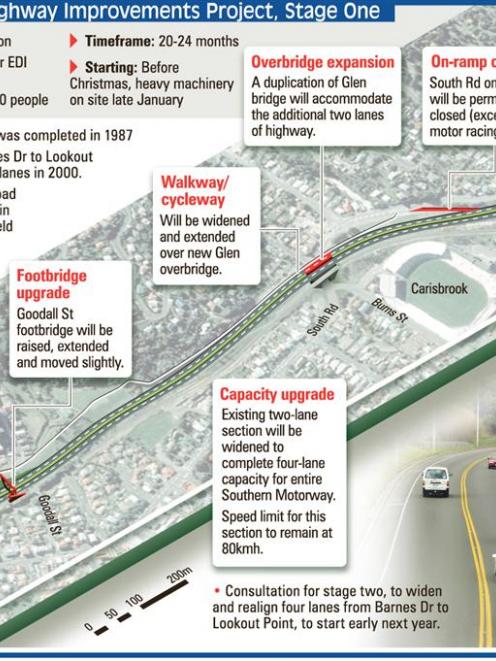 Caversham Highway improvements project, Stage One. ODT Graphic.
Private land might be bought to build a bridge across Caversham highway in Dunedin.

The New Zealand Transport Agency (NZTA) has already bought more than 20 properties between Barnes Dr and Lookout Point ready for the widening and realignment of the four-lane highway.

Project manager, Simon Underwood, yesterday said the "property need" of the up-to $25 million project might change, depending on plans to build a bridge between Riselaw Rd and Mornington Rd.

A bridge was dropped from the original upgrade plans considered by the Otago Regional Land Transport Committee last year. NZTA's national board asked for it to be put back in.

Recently released plans did not include a bridge, but documents being prepared for formal consultation from early next year will, Mr Underwood confirmed.

Mr Underwood said he had "an idea" of how many private properties might be affected by the change, but wanted to talk to landowners before going into details.

"I think a lot of people on the corridor will know things are going on, but we have not yet provided them with the detail which we would like to provide them with, so that they can have a full appreciation."

The agency had not decided on the preferred bridge "treatment", but Mr Underwood expected it to be a two-lane bridge, with a footpath, supported by abutments rather than piers.

NZTA Otago-Southland acting director Bruce Richards said the agency would have to apply to extend the designation for the highway, and that affected landowners could also be part of that process.

The agency would start consulting on the bridge plans early next year. Consultation will influence the plans and the designation, he said.

In October, NZTA confirmed it bought land from the Dunedin City Council and from 19 private landowners, but that one private purchase was still being negotiated.

Mr Underwood yesterday confirmed the purchasing programme "is not all concluded".

The Barnes Dr to Lookout Point section is the second stage of the highway improvement project. The $19.5 million stage one project, to widen to four lanes the road between Andersons Bay Rd and Barnes Dr, starts before Christmas.