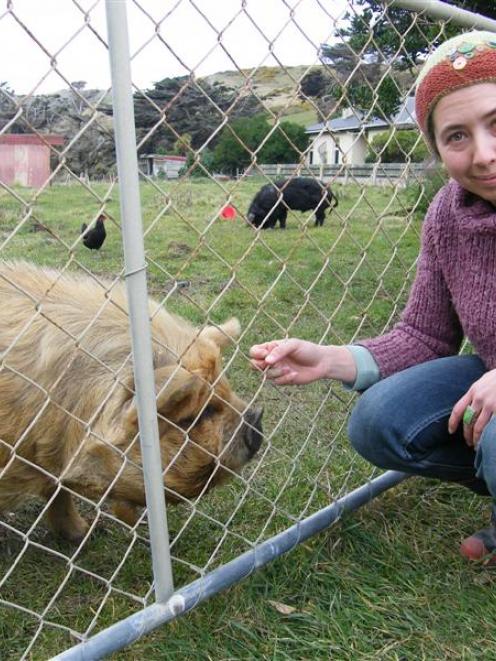 Smaills Beach resident Felicity Yellin with the friendly kunekune sow being housed with Miss Yellin's boar while she tries to find the sow's owner.
Smaills Beach locals are talking about the mystery blonde who has turned the head of Humphrey the resident bachelor. But this love match may not last.

Ten days ago, Felicity Yellin was woken by dogs barking at her Smaills Beach property.

‘‘I opened the door and there was this beautiful blonde girl kunekune [pig] standing on the porch helping herself to the chickens' mash,'' Miss Yellin said.

It just so happened - and this is no porky - that in the adjoining paddock was a lone kunekune boar, Humphrey.

‘‘We got him at Christmas,'' Miss Yellin said.

‘‘He'd been on his own since February and was feeling lonely so we put them in together.''

Relationships are tricky things at the best of times and everyone knows you cannot make a silk purse out of a sow's ear, but the two seemed to hit it off.

‘‘We called her Freda. They were snuggling together and really looked like they were pigs in love.''

But by the time this reporter visited, the friendship had sowered.

Perhaps Humphrey had been hamming it up. Maybe he had made an even rasher move. Or perhaps she just found him a bore.

Whatever the reason, Freda's attitude every time Humphrey approached was decidedly, ‘‘when pigs fly, buster''.

‘‘We don't know where she came from,'' Miss Yellin said.