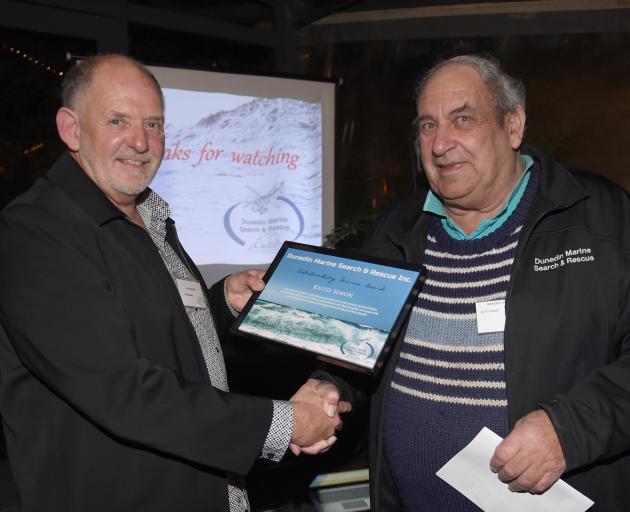 Among the members of Dunedin Marine Search and Rescue receiving awards was Keith Simon, who was given an outstanding service award for his more than 30 years' service.

His award citation said Mr Simon started his career in marine search and rescue when he moved to Taieri Mouth to become a fisherman.

The local fisherman's radio would call Mr Simon for help as he had the fastest boat on the wharf.

Due to the diminishing number of fishing boats to assist with search and rescue, Mr Simon became the go-to person for marine assistance.

He was later recognised by police when he was appointed as a marine search and rescue adviser to them and the Balclutha District Council has also taken his advice.

In a speech last night, Dunedin Marine Search and Rescue chairman Scott Weatherall said the organisation had a rocky past few years, "mainly due the way the organisation and its members are utilised by the police".

"With the new, or now not so new, Health and Safety in the Workplace Act and a change of local police search and rescue management, there has seen [sic] some changes predominantly in the way search and rescue resources are tasked for incidents."

Police was really "taking back" the incident management and co-ordination of marine incidents. Change was inevitable.

"We must embrace it moving forwards as constant change, review and looking for opportunities to improve doing what we do is a guarantee."

Otago Daily Times illustrations editor Stephen Jaquiery was awarded a certificate of appreciation in recognition of his "exceptional" support through photos and publicity for the organisation.