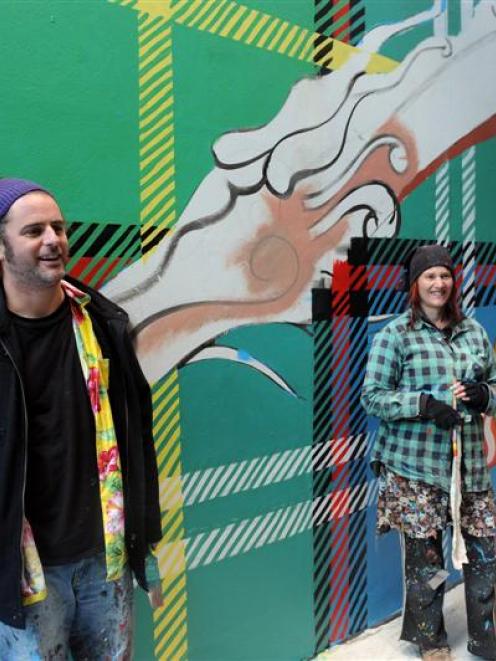 Artists Dan Mills, of Mangawhai, and Phillipa Crofskey, of Dunedin, smile about their Hoyts Lane handiwork yesterday. Photo by Craig Baxter.
Hoyts Lane off the Octagon is being transformed into a sort of time tunnel.

Dunedin's colourful history is being woven into a tapestry which will be rolled out during the Otago Festival of the Arts.

Artist Dan Mills, of Mangawhai, said the mural was a blend of Maori, Scottish, Chinese and Lebanese culture.

"I wanted it to represent Dunedin's history and the fabric of its society," he said yesterday.

"So, it entwines Scottish tartan, Chinese fabric, Lebanese embroidery and woven flax. There are a lot of metaphors in the work. The gold in the fish scales represents the gold taken from the ground of Otago, while the taniwha is also a Chinese dragon.

"Everything flows towards the Octagon, through a flax fishing net."

Mills will be working on the mural with the help of local artists every day this week.

"A lot of people have been coming through and talking to us about it and it's great that it's getting so much attention and positive comments. I'm really enjoying doing it and it's a lot of fun being part of the festival."

Mills also has an exhibition, "Home is Exotic" which is on at Gallery De Novo during the arts festival.