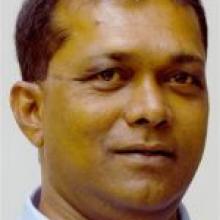 Shimrath Paul
The Otago Museum has attracted about 205,000 visits in the past five months, up about 13% on the corresponding period last year.

There were about 461,000 visits to the museum last financial year, but that will be far exceeded this year if present trends continue.

Spending through the museum shop has increased to $160,573, in the first five months of the financial year until November 30, from $131,102 at the corresponding stage the previous year.

Attendance at the Discovery World science centre and its Tropical Forest had remained fairly steady but had not risen, museum chief executive Shimrath Paul told an Otago Museum Trust Board meeting this week.

Science centre admissions income amounted to $196,841 in the five-month period, down slightly from $199,970 in the comparable previous period.

Mr Paul said although science centre and Tropical Forest attendance had remained steady, this was actually positive because he had predicted this attendance might begin to fall significantly.

Museum experience and development director Clare Wilson later said it was unclear exactly why overall attendance had risen and how long that would continue.

A lively and varied programme of museum exhibitions and activities was also attracting visitors.