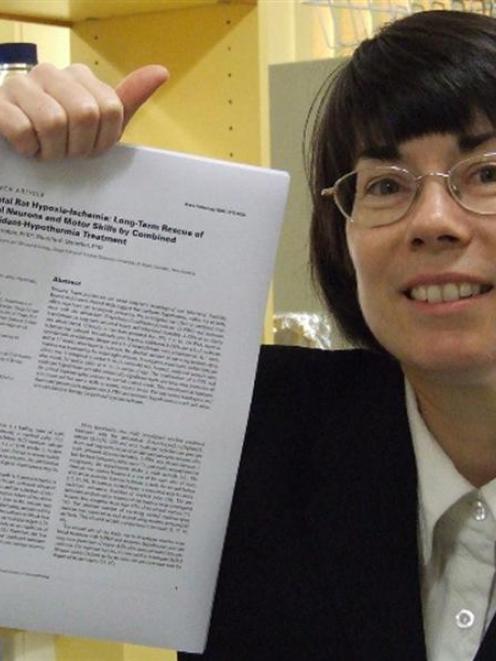 Newly-published research by Associate Prof Dorothy Oorschot, of the university's anatomy and structural biology department, indicates that combining the therapies may be effective in rescuing damaged nerve cells and restoring motor function.

Between one and six children per 1000 live births receive brain injury due to low oxygen levels at birth.

This can lead to conditions such as cerebral palsy.

Current treatments to prevent the brain injury - which results from a series of devastating chemical reactions in nerve cells - are only moderately successful.

‘‘It was like a Eureka moment,'' Prof Oorschot said, reflecting on the time several years ago when she saw first results of the research showing the effects of the combined therapy.

‘‘It was really, really exciting. We realised we were on to something. ‘‘It's provided greater hope than we've had until now,'' she said.

‘‘It's potentially applicable to a subset of babies exposed to hypoxia [oxygen deprivation] during child birth.''

On their own, the two treatments, which involved inducing moderate hypothermia or administering an antioxidant, showed either no or modest improvement.

‘‘However, when we used the treatments together in an animal model, we found that nerve cells were protected and fine motor skills preserved after moderate brain injury from oxygen deprivation, '' she said.

The findings by researchers led by Prof Oorschot have recently been published in a leading international neuropathology journal, Brain Pathology.

The effect of brain damage resulting from hypoxia in newborns was ‘‘a major social and financial burden'' for society as well as a big burden within the immediately affected families, she said.

She hoped that if further research results were also favourable the potential new form of early intervention therapy for newborns could be developed in five to 10 years.

The Otago researchers are now focusing on refining the combination of the two treatments to provide the most effective results.

‘‘We are hopeful that this combined treatment might one day be able to rescue completely damaged nerve cells and restore motor function to normal levels in affected babies,'' she said.