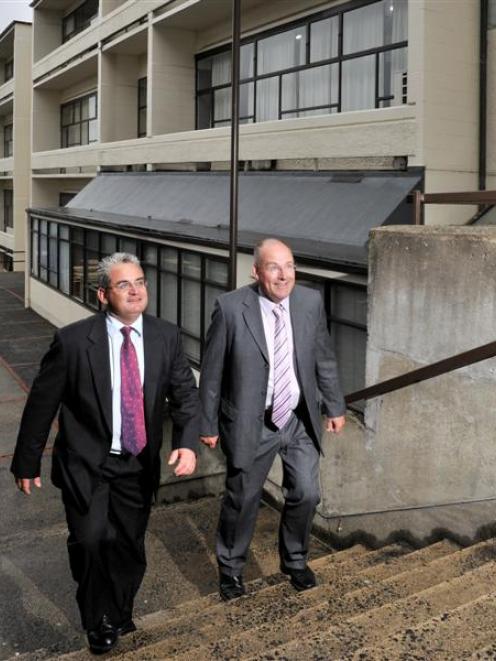 Kavanagh College principal Paul Ferris (right) shows his replacement, Tracy O'Brien, around the school during a visit on Thursday. Photo by Gerard O'Brien.
It may get cold in Dunedin, but Kavanagh College's new principal believes the challenge of running the Catholic school will keep sweat on his brow.

Tracy O'Brien (45) will take over the helm of the school in term 3 upon the retirement of Paul Ferris - the school's principal for the past 18 years.

Mr O'Brien visited the Dunedin school this week to get a feel for its inner workings, and already has plans for the school's future.

"Because the school has had such a long, successful tenure with Paul, it will be an excellent challenge to continue that."

He hoped to continue building relationships with families and the community, and was also keen to develop the school's strong focus on technology and applications for its use in education.

Mr O'Brien has been principal of Cullinane College in Wanganui for the past eight years.

Before that, he was acting principal for a year at Tato Petera College in Auckland, and a history and economics teacher for the previous 14 years.

Mr O'Brien brings with him a wealth of experience in sporting pursuits - particularly rugby and cricket.

He played second five-eighth in the Otahuhu and Marist North Harbour senior rugby teams, and has coached first level school cricket with much success.

Mr O'Brien was delighted to have been named Kavanagh College's new principal and was excited about the challenges.

"It's a chance to lead a bigger community, and to lead a highly successful school.

"My school [Cullinane College] has only 300 students.

"Moving to a school with 800 will extend my professional boundaries."