No rebuild cover for Knox Church 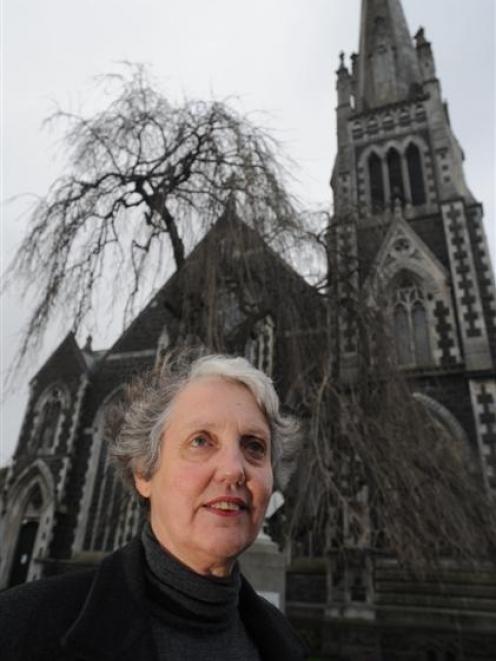 "We have kept our insurance costs about the same but we are covering less." Photo by Peter McIntosh.
The imposing 136-year-old Knox Presbyterian Church would not be rebuilt in its present form if damaged to the point where it had to be demolished, church officials have decided.

Because of the soaring cost of insuring historic buildings since the Christchurch earthquakes, the church - one of Dunedin's oldest and the city's largest - was no longer insured against earthquake damage and was insured for only about one-third of its full replacement value if destroyed by a non-earthquake event, such as a fire, minister the Rev Dr Sarah Mitchell said this week.

Parishioners would be informed in a newsletter, she said.

In the newsletter, which she supplied to the Otago Daily Times, the church's finance committee convener, Chris Bloore, said the new arrangement "reflects the reality that we would not rebuild the church in its present form should it be demolished".

Last year, Knox was one of hundreds of churches throughout New Zealand which had to find alternative insurance cover because Ansvar NZ said it was pulling out of the church insurance market after taking a $700 million claims hit in Christchurch.

Ansvar insured about 75% of the country's churches.

Knox decided last year not to insure for earthquake damage but to insure for fire and malicious damage cover to full replacement value, Dr Mitchell said. That decision still led to its insurance premiums jumping by 57%, from $14,000 to just over $22,000.

Knox had now negotiated alternative cover with another company, at a cost of just under $22,000, she said. All figures excluded GST.

The church was "reasonably happy" with the cover, she said.

We have kept our insurance costs about the same but we are covering less."

However, the insurance premiums provided full cover, including earthquake damage, for the church halls on the George St site.

Christchurch-based insurance broker Craig Gudsell, who specialises in insurance for not-for-profit organisations such as churches, Christian schools and trusts, said this week the decision made by Knox was one being wrestled with by the owners of historic buildings all over the country.

Since the Christchurch earthquakes, insurance companies had either pulled out of insuring pre-1935 buildings or had refused to insure against earthquake damage. The year 1935 was significant because buildings constructed before that date had lime mortar which did not hold together well in earthquakes.

Historic building owners were now "struggling" to meet insurance premiums which had doubled, or trebled, or more. One Christchurch church client was facing an increase of almost 300% in its premiums. In some cases, historic buildings could not easily find a company to insure them at all.

Before the earthquakes, the excess on a pre-1935 building was usually 2.5% of the amount of the claim. Now, the standard excess was 10% of the value of the site, he said.

"That means if all the buildings on a church site are valued at $10 million, the excess for a single claim would be $1 million.

"There is starting to be a trend where owners are questioning the validity of full replacement cover at all and are choosing `functional replacement' cover instead. That means if their buildings go, they would replace them in some other form rather than replace them exactly as before."

Mr Gudsell, who has been an insurance broker for 20 years, said the past 16 months had been "the busiest of his career" as clients sought advice about who would cover them, how much it would cost, and what they would get for their premiums.