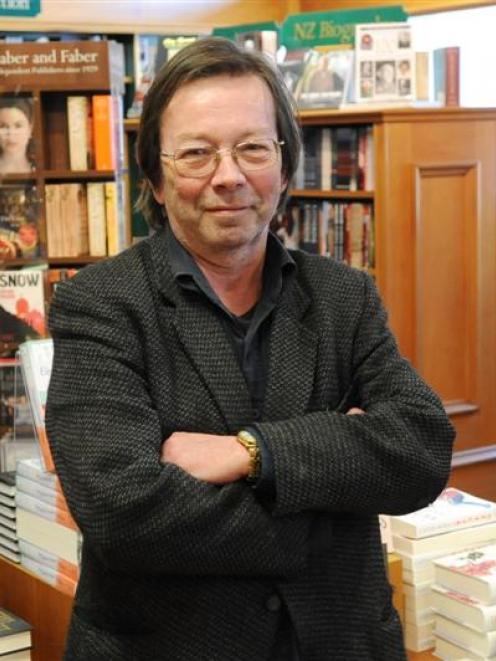 Someone else will have to find the bookseller's next silver bullet, Bill Noble says.

The past four decades have been "one long highlight", he says. 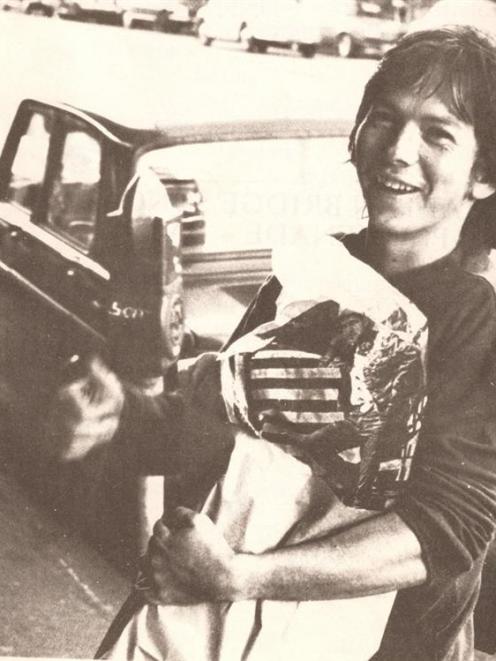 A 25-year-old Bill Noble in Auckland not long before becoming manager of University Book Shop, in Dunedin, in 1978. Photo supplied.
"The only lowlight is the fierce and predatory competition we're enduring," he adds through a puff of cigarette smoke.

Next weekend, the day after he turns 60, Mr Noble will be farewelled as manager of Dunedin's University Book Shop (UBS).

Friends, staff and industry colleagues will gather to honour the man who has made UBS one of New Zealand's finest bookshops and who himself has become a pre-eminent figure among this country's booksellers.

Mr Noble was a fresh-faced 25-year-old when he became the youngest-ever manager of UBS.

But he had grown up with a rich book heritage in his native Canada. 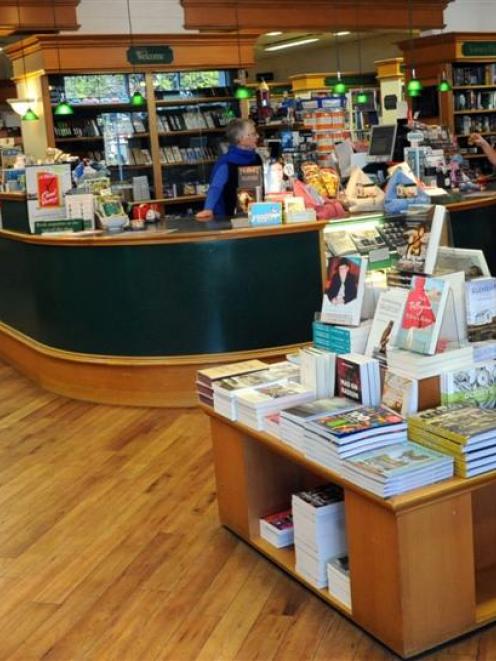 The University Book Shop. Photo by Linda Robertson.
"My father was founder of the country library service in Manitoba," he says, taking another sip of cherry-red Chianti.

"I was pretty much brought up in a library."

From as early as he can remember he has enjoyed "our surpassingly beautiful language" and the myriad ways it can be used in elegant and effective writing.

Which is not the same thing as liking books per se.

"There are a lot of people who claim to like books in general. But there are bad books, like anything else.

"I do, however, like quality books - those with elegance of prose and design."

His own reading tastes, these days, are quite specific - crime novels, mostly.

"In my 20s I tried to be a little more highbrow - Fitzgerald, Hemingway.

"Patricia Highsmith is my favourite writer in any genre. She writes highly literate crime novels, but consistently fails to sell at full price.

"Every year her books turn up in the UBS sale room and I send them back downstairs. I say, no, people can pay full price or not at all."

At 19, his father found him work at Duthie Books, in Vancouver. He showed natural flair for the job, which also suited as a means to save enough money to travel.

"I wanted to go somewhere far away where they spoke English. I had thought of Australia, but one of my father's employees was from New Zealand and she said I should go there because it was much better."

After 18 months working for Whitcoulls predecessor Whitcombe and Tombs, in Auckland's Queen St, he returned to Canada, but within three weeks was already planning to emigrate.

"I started feeling homesick for New Zealand, which I hadn't expected."

The book trade continued to be his meal ticket and increasingly his passion. First he worked for an Auckland publishing company and then as buyer for that city's University Book Shop.

In 1978 he shifted to take up the reins of UBS in Dunedin.

"He was such a young man and had such a vision," Palmerston North-based veteran publisher Paul Greenberg said.

The effect on Dunedin and New Zealand's bookselling scene would be significant.

UBS had begun life as the Presbyterian Bookroom in a converted two-storeyed house on what is now a grassed triangle of land across from the Captain Cook Tavern on the edge of the University of Otago campus.

In the mid-1950s it was bought by the family of ardent bookseller John Griffin who, by the early 1960s, had renamed it the University Book Shop and relocated it 50m up the road to its present home, the former Regina Confectionery Company building.

The chalk signature of poet and arts patron Charles Brasch can still be seen in the UBS staff room where he and distinguished author Janet Frame worked on editions of influential literary journal Landfall.

By 1978, Whitcoulls and the Otago University Students Association were joint owners of the bookshop which had become "somewhat directionless", Mr Greenberg said.

Not long after Mr Noble's arrival, Dunedin bookshop owners and managers invited him to an afternoon tea where it was strongly hinted that UBS should stick to selling textbooks.

But he has always been "his own person, and searingly intelligent", Mr Greenberg said.

Instead, while retaining textbooks as a core part of the business, he set about deepening and broadening the general books section of the shop.

"When I started, the whole market in New Zealand was dominated by UK publishing," Mr Noble said.

But he knew publishers in North America were producing cheaper, more contemporary-looking books with titles by renowned authors which would not appear in United Kingdom paperback editions until months or years later.

"Bill must be recognised as one of the most significant figures in New Zealand bookselling," Tandem Press founder Bob Ross said.

"He was innovative and imaginative in building a bookshop aimed at a broad range of customers. In the late '70s and early 1980s, Bill actively established contacts with sources of supply such as Book People in the US to bring in stock - both bargain-priced and specialist books - that no-one else was yet on to."

Mr Noble approached bookselling as an exciting opportunity to "gamble on new and little-known authors; on titles ranging from the quaint to the outrageous, from the breathtakingly beautiful to the powerful and disturbing".

"To stock and sell just one copy of a book of real quality gives us as much pleasure as watching the latest bestseller fly off our shelves."

Today UBS carries 44,000 different titles - two-thirds of them general books - and has 75,000 titles in its active database.

Gillian Newman, who worked at UBS for 15 years and is now assistant manager of Christchurch's University Book Shop, said Mr Noble "enhanced the whole literary life of Dunedin, by bringing in the unusual, the rare; having a different slant".

"Without doubt he is one of the pre-eminent booksellers in New Zealand," she said.

"Working at UBS was like being part of a family, and it was certainly a privilege to be part of that family."

It is a talented but often unconventional family.

Mr Noble became well known for supporting the arts generally, and the cultural value of books specifically. For 15 years, UBS has given a book to each newborn arrival at Dunedin's Queen Mary Maternity Centre. Mr Noble has also encouraged UBS staff to support, and take a role in, a range of book awards and festivals.

Opera and playing pool are two of his other passions.

The competitive pool-playing had to be cut back because it meant "way more time in pubs than was a good idea". But his love of opera - which developed through waking up in the early hours and listening to Radio New Zealand Concert - has endured.

"It's become mainly what I listen to unless I've been drinking, when it's Rolling Stones."

And that love has been passed on to his daughter Sarah Noble, who is an international opera critic.

Ms Newman said Mr Noble allowed staff to use their initiative, which was part of the shop's formula for success.

As a manager Mr Noble believes he was not so much a motivator as a "schoolmarm", educating and nagging.

"I always said, I don't care if you ask me the same question 25 times as long as the result is that we get it right in the customers' eyes.

"It's all about doing things as perfectly as we can.

"If we do things as perfectly as we can, the profits should follow. And it's a more pleasing and creative way to operate."

His reputation in the bookselling industry also grew well beyond Dunedin.

Kevin Chapman, who is president of the Publishers Association of New Zealand, said Mr Noble's knowledge and insights made him sought-after by publishers throughout the country.

"Publishers quite often, when they are wondering whether to publish a book or what to do with a book, will give a bookseller a call. Bill was simply so experienced, he was one of those go-to people," Mr Chapman said.

UBS board of directors member Rachel Brooking said Mr Noble had established UBS, now wholly owned by OUSA, as "one of the country's best bookshops".

"Bill's stature in the trade and his contributions not only to UBS but to the bookselling industry New Zealand-wide will make filling his shoes a difficult task," she said.

The position is being advertised nationwide.

As shadows stretch across the bar's walled deck, and a last glass is filled, Mr Noble says it has all been a highlight - "seeing the business grow not only financially but in its relationship with the community and the regard people appear to have for it".

The only significant negative development has been the threat posed by online booksellers, in particular those using "predatory pricing".

"When they came along 15 years ago I thought this can't last, they are losing zillions. But they are still here ... operating apparently on money-losing models."

It had also given rise to the worldwide phenomenon of "showrooming" - browsing in bookshops and then ordering online.

"It's even to the point of people scanning barcodes in-store. They can leave having bought nothing, and already have the book in transit," he says with obvious distaste.

"It's annoying a lot of people, and putting some out of business."

UBS was faring "better than most". But a lot of smaller, high-quality independent booksellers that did not have UBS' economies of scale were "operating hand-to-mouth".

Bookshops needed to find an effective way to respond - changing how they operated while maintaining the essence of what it meant to be a bookshop.

"No-one's come up with the silver bullet yet."

And it is unlikely to be him, Mr Noble says.

While he always intended to retire when he was 60, diabetes has forced him to keep his word.

"I've ignored the diabetes for many years, but it's got a lot worse ... I've run out of steam," he says.

"Going up against [online] companies that don't seem to need to make a profit - it's like suicide bombers, they don't give a [toss]. You can try to fight it, but it needs more energy and imagination than I currently have."

Mr Noble is keeping any future plans close to his chest.

He once successfully taught someone to read and write using his own method, so perhaps adult literacy will be part of the mix, he says.

"I have the luxury of having a little time to decide. But being retired is not the same as being on holiday ... I would go stir-crazy if I was doing nothing for long. I don't want my brain to rot."