O Week praised on all sides as success 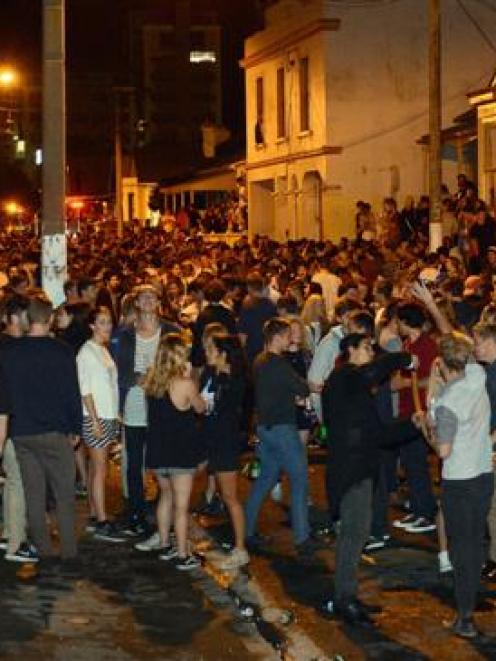 Revellers gather in Hyde St on Saturday night. Photo by Peter McIntosh.
O Week has been lauded a success by authorities.

While scenes of trashed streets and furniture fires in the student quarter caught the attention of national media, they were blips in a ''by and large'' successful and trouble free week, the University of Otago says.

University of Otago vice chancellor Prof Harlene Hayne said it was ''an honour'' to be involved in another O Week.

''From the many social events to our more formal gatherings, Orientation Week is an incredible opportunity to make the thousands of bright young students who have chosen to study here feel welcome,'' she said.

''This year, we have truly succeeded in showcasing all that Otago and Dunedin has to offer; that anything is possible here.

''To the many people who have contributed to this year's orientation activities ... you are the foundation of this week's success. Your time, effort and commitment are appreciated.''

''The feeling on campus was one of excitement, the weather co operated and the goal of orientating new students to the university and Dunedin was achieved,'' she said.

''In particular we were stoked with the attendance and outcomes from the new convocation ceremony and Otago variety show event.

The International Food Festival on Saturday was also fantastic, with an estimated 3000 plus people attending. The large music events on Thursday and Friday were also hugely popular and both shows were really impressive.''

Despite that, the visiting artists were pleased with their time in Dunedin.

''The feedback has been amazing,'' she said.

Crowd behaviour at OUSA events was also heartening, she said.

''Many commented that there were less issues than other years,'' she said.

''This is most likely due to support and safety teams.

''We are, however, concerned about the increase in reported fires, particularly from a safety perspective for students.

''We are eager to work alongside our usual partners, the DCC, police, Fire Service and the university and be part of the solution for this issue.''

Troublemakers were in the minority and the actions of students who cancelled parties which had got unmanageably large showed maturity and should be commended, she said.

''It is also important to note that incidents in North Dunedin are frequently not caused by students, which is backed up by comments from the Fire Service and police,'' she said.

''The organised Orientation events were well run and went off with very few issues,'' he said.

''However, police are very disappointed with some of the actions of a small number of people who engaged in dangerous and antisocial behaviour linked to excessive use of alcohol.

''Police will be looking to engage further with our partner agencies with a view to addressing that behaviour in the future.''

The University of Otago said, midweek, that the proctor had issued $4500 in fines to 35 students for breaching the code of conduct, but full figures would not be known until this week.