A Dunedin businessman and his city councillor wife have been labelled "dinosaurs'' amid claims they are deliberately standing in the way of the warehouse precinct's regeneration. 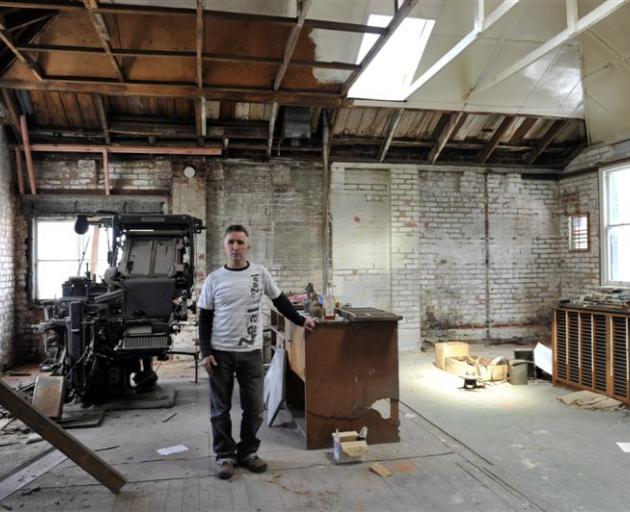 Lawrie Forbes sees space for an apartment where others see only the ruins of one of three Rogan McIndoe Print buildings in Dunedin. Photos by Peter McIntosh.

The criticism came after it was confirmed yesterday Alistair Broad, a commercial property owner and businessman, had filed an objection opposing the Vogel St Kitchen's bid to renew its liquor licence.

Mr Broad's opposition to the popular cafe and restaurant, located in the heart of the warehouse precinct, prompted a stinging rebuke from the building's owner, Dunedin developer Lawrie Forbes, yesterday.

Mr Forbes said Mr Broad appeared to be motivated by a desire to protect his own competing commercial interests, and the actions of his wife, Cr Hilary Calvert, were also "suspicious''.

"He [Mr Broad] is protecting his own patch. It smells like it to me.

"These people are becoming dinosaurs. We are the new generation,'' Mr Forbes said.

Cr Calvert was publicly outed last November when, while sitting on a hearings committee considering plans to pedestrianise part of Jetty St, inside the warehouse precinct, she went beyond formal process to seek extra input from motorists affected by the proposal.

The councillor was later cleared to continue as a member of the hearings committee, but only after her bid was scuppered by legal advice.

Mr Forbes' concerns came after it was confirmed last year the law firm Gallaway Cook Allan planned to move from its Princes St base to Vogel St later this year.

Mr Broad confirmed yesterday he had a shareholder's interest in the law firm's Princes St building, and was losing business as a result of the rise of the warehouse precinct.

However, the law firm's shift was a "done deal'' and not the reason for his opposition to the warehouse precinct, Mr Broad insisted.

Instead, he was concerned about the council's push to promote growth there and the impact it was having on George St, rather than his own bottom line.

The precinct remained zoned for large-scale retail uses, although it was proposed to become a mixed-use zone - allowing a wider variety of uses - under the second generation district plan.

Mr Broad said the council appeared to be pushing its own "pet project'' despite the rules, and he wanted that to stop - at least until the 2GP was in force later this year.

Vogel St Kitchen was granted non-notified consent in March last year, despite being a non-complying activity under the zone's existing rules, which was unfair on other building owners, he said.

"When the city starts ... choosing winners - that is, people who are today's good idea - then I think anybody who owns property would be concerned.''

Cr Calvert declined to respond directly to Mr Forbes' comments, but said she had conducted herself "appropriately'' during the Jetty St hearing and was "trying to do the best I can as a councillor''.

Cr Calvert denied being motivated by commercial interests and said she supported the commercial reuse of heritage buildings wherever that occurred.

Mr Forbes rubbished the claim as "absolutely ridiculous'', saying George St's retail decline pre-dated the rise of the warehouse precinct and the two were not linked.

Tenants were being drawn to the precinct not because it was cheap but because he and other landlords worked hard, he said.

"I know for a fact the world is changing rapidly. It's just free-market economics.''

Mr Forbes said he spent about $40,000 to obtain Vogel St Kitchen's resource consent, and had ‘"too much skin in the game'' not to fight Mr Broad's opposition.

"I'm actually quite annoyed by it ... someone goes and gives some little ray of hope in this bleak city, and someone else comes along and tries to stamp on it.

"I'll fight for it, and I know the general public is behind me.''

Council staff said Mr Broad's objection would be considered by the hearings committee, which would first determine if it was "valid'' before proceeding to any hearing.