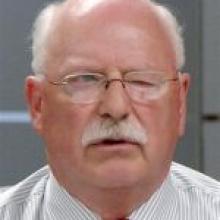 Errol Millar
The former Otago and Southland district health boards have shown progress towards meeting all six health targets in the last quarter of the year, the latest figures show.

Southern District Health Board chairman Errol Millar said he was " extremely delighted" at the results.

"It's another indication that there is an awful lot of things done well within the Southern DHB environment."

There was often criticism of the board and its deficit, but the results showed that staff were doing everything that was asked of them, he said.

Both of the old boards exceeded the elective surgery targets for the year, which required an average of an extra 4000 procedures, with Southland second-placed nationally with 110% and Otago 12th with 104%.

Nationally, only one board, MidCentral, Palmerson North, with 96%, was under the target.

Mr Millar said the failure to meet the emergency department target, where Otago was shown as the poorest performer, had much to do with the Dunedin Hospital facilities.

Even though progress had been made towards meeting the target of 95% of patients spending no more than six hours in the emergency department before being admitted discharged or transferred, only 74% of Otago patients met this criteria for the year ending June. In Southland, the figure was 85%, slightly below the national average of 87%.

At this week's Southern District Health Board hospitals' advisory committee meeting it was reported that in July the percentage of patients waiting longer than six hours at Dunedin Hospital emergency department was 70.16%.

Dunedin chief operating officer Vivian Blake said the hospital was still struggling with this issue and was working on initiatives to improve the situation, including the forthcoming computer simulation exercise to test a variety of scenarios and a project to track the progress of orthopaedic patients.

Another proposal, which was still at the early planning stage, was for a 12-month pilot programme for an acute admitting medical registrar to be assigned to the emergency department.

For that time, it was hoped that a registrar's position could be created from within the existing 27 registrars at the hospital by some other areas within the hospital agreeing to reduce their registrar requirements.

If it was agreed to, and was successful, it could mean that an extra registrar position would need to be created long-term or a permanent reduction made within other areas.

The idea was that the registrar, supervised by a senior medical officer, would be the "first port of call" for patients visiting the department within restricted hours.

Mrs Blake said the six-hour target was laudable, but without a short-stay unit it was difficult to ensure all patients were dealt with in that time.

The meeting was also told that there would be difficulty in meeting the revised cancer treatment targets. From July, semi-urgent referrals are expected to receive first specialist appointments within three weeks instead of four, and chemotherapy should begin within two weeks of this appointment.