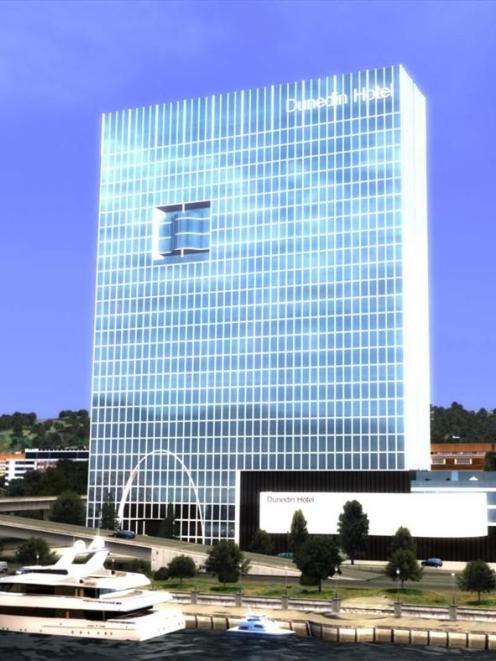 An artist's impression of the hotel which was rejected.
Nothing is off the table as the developers behind the foiled bid to build a $100 million waterfront hotel in Dunedin consider their options, Betterways Advisory Ltd director Steve Rodgers says.

However, Mr Rodgers - the man fronting the hotel project - yesterday told the Otago Daily Times those calling for alternative hotel locations to be considered should name the sites.

''I think wherever we go in the city, we've got a problem. We've got a height-limit problem or a use problem,'' he said.

Mr Rodgers yesterday said he worried the Dunedin City Council's hearings committee's decision to decline resource consent might send a message to other developers considering investing in the city.

''I fear that it gives the impression that Dunedin is closed for business.''

The committee's chairman, Cr Colin Weatherall, had stressed on Wednesday the decision was not anti-development, and Otago Chamber of Commerce chief executive John Christie said he did not believe the committee was sending that message either, by saying no to the hotel.

Mr Rodgers worried it was already ''hard enough'' to attract big private developments to Dunedin, and this would only make it worse.

''Because there are so few applications that are done in this city, in comparison to say Auckland ... it worries me that that is what it will do - that that is the signal it is sending.

''I think we've got to be very careful before we say no.''

The hearings committee's decision was in part due to concerns about the hotel's 96m height, and the impact the tower would have on its surroundings.

That prompted Mr Christie to say he hoped talks with Betterways could identify alternative sites that could yet rescue the project.

Dunedin heritage building owner Stephen Macknight, who opposed the hotel, also said many people wanted to see a hotel proceed - just not in the way proposed - and there were alternative sites available.

Mr Rodgers yesterday said Queenstown-based hotel developer Jing Song remained overseas, and he was yet to speak to her about the decision or whether an appeal, an alternative site, or a new building, could follow.

While ''nothing is off the table'', the site at 41 Wharf St was considered the best available in the city and the hotel's height was essential for the project to be economic, he said.

''I have yet to see another site that would take a 28-storey building ... because of height limits.''

Told of Mr Macknight's comments, Mr Rodgers said: ''Well, let him name them, because ... other than industrial land, I don't know of any.''

Mr Macknight later named three - the waterfront site formerly suggested as the home of the Otago Regional Council's headquarters, and council-owned car parks at Dowling and Filleul Sts, opposite the Town Hall.

The ORC site was ''potentially huge'' and could allow a five-star development that was low-rise, but still offered harbour views, he said.

The Dowling St and Filleul St sites would allow slightly larger buildings, at least to the height of those surrounding them, and had previously been suggested for hotel developments by the council, he said.

Another option could be land beside Forsyth Barr Stadium, tucked in near a hill, ''because as soon as you get in to near a hill with nobody behind you, the idea of going a bit higher isn't such a problem anymore''.

Mr Macknight accepted none of the sites he suggested would accommodate a hotel of the height envisaged by Betterways, but it was ''a matter of your design suiting the site''.

Council staff said the Dowling St and Filleul St sites were part of the central activity zone, which had height restrictions of between 9m and 11m in the Dunedin district plan.

The ORC site was part of the harbourside zone, which in the steamer basin area had a height limit of 13m-15m, depending on the exact location.

Elsewhere, the district plan's rules set height limits of between 6m and 11m for buildings in most other zones, including rural, rural residential, local activity zones in outlying suburbs and the city's large-scale retail area.

Only the stadium zone (with a maximum height of 60m) and parts of the campus zone (maximum height of 40m) allowed significantly higher buildings, but even those would not accommodate a building of the hotel's height, staff confirmed.

Parts of the industrial 1 zone - including Wharf St - were the only types of land in Dunedin that did not have a specific height restriction, but the hotel bid had still failed.

Mr Rodgers said he had been ''consistently told'' the economics of the building demanded a tall tower, and couldn't yet say if a smaller building, or a different site, could be considered.

''I'm acting on instructions ... it's not my money, so I don't know the answer to that.

''I hope that we can get a hotel built for the city. I still think it's a golden opportunity for the city, and I want to try and do everything I can to make sure that opportunity is achieved.''

Mr Rodgers said his team was ''working away furiously'' on new advice for Ms Song, but talk of any plans remained ''speculation'' until discussions had been held.