Pacific children of US servicemen for study 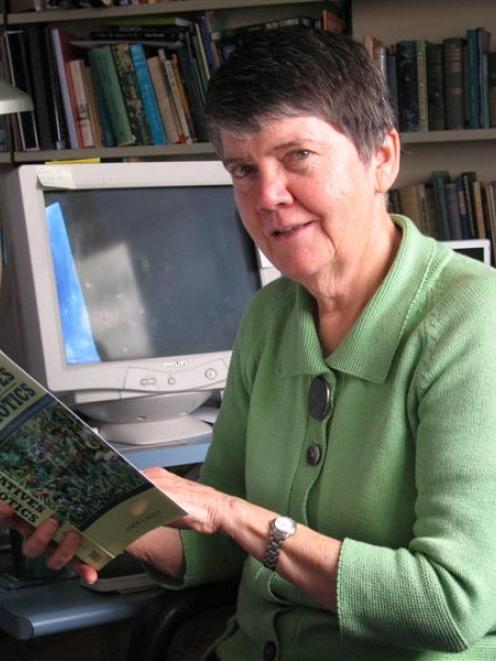 Prof Judith Bennett, of the University of Otago history department, examines a copy of her latest book Natives and Exotics, which has spawned follow-up research into the children of United States servicemen and Maori and Pacific Island women. Photo by Allison Rudd.
World War 2 brought two million United States servicemen to New Zealand and many Pacific Islands. Inevitably, many formed liaisons with local women and fathered possibly several thousand children. What happened to those babies, and, more than 60 years later, where are they now? Allison Rudd talks to University of Otago historian Prof Judith Bennett, who has won funding to try and trace the all-but forgotten offspring.

Judith Bennett was doing some research when she got sidetracked.

She was compiling information for a book on the environmental effect of the war on Pacific Island countries when she came across references to the mixed-race children of local women and United States servicemen.

Her interest was piqued.

"I was very curious because I could find very little on this topic.

"So it seemed to me there were questions that needed to be answered: How were these children accepted?

"Did their parentage affect their land rights?

"Did it affect their marriage prospects?

"How were their mothers characterised in their own societies?

"How did the US Government view marriage?

"How did the indigenous people view these relationships?

"Were they profitable, were they shameful, or were they a mixture?

"What have been the long-term effects of mixed parentage?

"These children would have looked different - their fathers were white or African American.

"What impact did that have on them as they were growing up and when they were adults?"

Now Prof Bennett hopes to satisfy her curiosity, having secured a $917,000 Marsden grant to embark on a three-year research project.

An all-women research team will search government, military and church records to try and find the children, then interview as many as are willing about their lives.

Prof Bennett plans to concentrate on the Solomon Islands and Vanuatu, while her Otago historian colleague Dr Angela Wanhalla, whose specialised area of interest is mixed marriages and relationships between Maori and others, will research the New Zealand angle.

The other team members are anthropologists Assoc Prof Jacqui Leckie, from Otago, and Dr Phyllis Herda, from the the University of Auckland, and three PhD candidates from Samoa and Fiji.

US servicemen were spread throughout the Pacific between 1942 and 1945.

Some were engaged in battle on the front lines in New Guinea, the Solomons, New Hebrides and elsewhere, but many more were stationed in places like Bora Bora (in French Polynesia), both Samoas, the Cook Islands, Tonga, Fiji and New Zealand.

It was inevitable they formed casual and sometimes more formal relationships with the local women, she said.

"On some islands, the population doubled overnight once the Americans arrived.

"On some atolls there would be 10 GIs for every islander.

"So this sudden influx of young, handsome men with money . . . was a situation set up for social engagements."

The project does not officially begin until next month, but Prof Bennett and her team have already uncovered some interesting information.

In Fiji, where 8000 troops were stationed in Nadi, the Governor unsuccessfully sought maintenance from the US Government for the mixed-race children left behind when the soldiers left.

In Tonga, Queen Salote was concerned about the number of women who became prostitutes, saying they had "lost their sense of values".

In the Cook Islands, a woman has been located who tried unsuccessfully for several decades to find her father.

Another Cook Island woman did locate hers.

He had died years before, but his widow welcomed her and introduced her to her half-siblings.

A very small number of servicemen married their children's mothers and took them back to the United States.

"There was a rule that white servicemen were allowed to marry white women as long as the women were vetted by the authorities and deemed acceptable.

"In New Caledonia, I know for sure there was a woman descended from French settlers . . . who wanted to marry a serviceman.

"I have seen the paperwork where Bishops attest to her good character.

"It might seem harsh, but I can see a reasoning in that.

"If they get married in the heat of war and things fall over and she's in America, who's going to pay for her to go back to New Caledonia?

"Those sorts of issues have ramifications for the US Government, so I don't think the vetting system was total heartlessness.

"It was the pragmatics of lonely young men being with good-looking women in strange places and thinking 'This is the love of my life'.

"I guess it was caution."

She has also read about a serviceman who fathered a child with a woman in Bora Bora.

After the war he returned to the island and married her, but could not survive there.

He tried to get her into the US, and finally succeeded by "discovering" she had a European ancestor.

Prof Bennett did not know if African American servicemen were allowed to marry.

"That's something we may be able to find out.

"My gut level is the authorities wouldn't buy it."

Prof Bennett said she she was excited about the project and the stories which might emerge, but the researchers knew they would have to tread carefully.

"These are things you approach delicately, because some people may say it is none of our business and we may find some resistance.

We are not going to force people to participate.

With the children of servicemen now at least 63 years old and society being more open and tolerant about illegitimacy and mixed-race relationships, this could be the right time to seek out the stories, she said.

"These people will be grandparents, and they may feel they need to tell their stories to their children and grandchildren."

The researchers hoped to publish a book of narratives from some of these children happy to tell their stories, she said.

Another book or two might also be written, and it was expected individual research papers would be published in an academic journal.

There was also a possibility of a television documentary being made, involving a Fijian film-maker.

• Prof Bennett would like to hear from the children of servicemen and Maori or Pacific Island women.