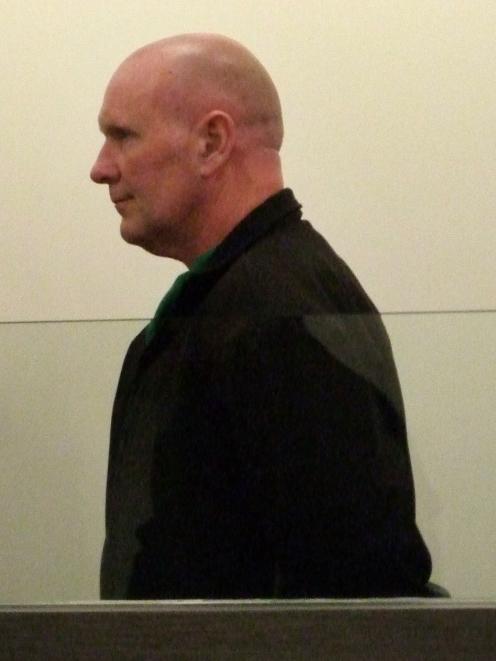 Peter William Pearson in the dock during his sentencing in the Dunedin District Court yesterday. PHOTO: TIMOTHY BROWN
A voyeuristic  Dunedin paedophile who preyed on the children of vulnerable single mothers has been jailed for more than six years.

Peter William Pearson (48) sexually violated and assaulted one boy under the age of 12 and performed indecent acts on another as well as a 13-year-old girl.

The Dunedin District Court heard the harrowing impact Pearson's offending had on one of his victims.

The boy, aged between 9 and 10 during the offending, suffered from ADHD and anxiety.

He met the boy in late 2015 and soon began a friendship with him and his mother, having the child to his home after school at least once a week, a summary of facts said.

By 2016 the boy was sleeping overnight at Pearson's home once a week.

From the boy's second visit he performed sex acts on the child, then aged 9.

The boy's mother told the court in her victim impact statement that Pearson's offending had caused the boy to show sexualised behaviour, threats to kill himself and led to violent outbursts.

``I often worry about [my child's] future and whether he will become a sexual offender,'' the boy's mother said.

``I feel guilty about what happened to [him] as I would allow him to go to Pearson's so I could have a break.

The boy had some behavioural issues before Pearson entered their lives, but those became much worse following the abuse.

On one occasion, a violent outburst at school led to the school standing the boy down. Pearson offered to help look after the boy during his time off school, inflicting further abuse.

``He had no right to offend against my son and family.''

The woman's distressing experience mirrored those of at least two other solo mothers, including those of a 10-year-old boy who had contact with Pearson since he was 4 and also a 13-year-old girl who lived with Pearson alongside her mother and sisters about two years prior to the offending.

Between April and August 2016, Pearson often had the children together at his home in Maryhill.

``On some of these occasions the defendant would have the children play a game called `spoons', which the defendant had modified to his own version,'' a summary of facts said.

``This game involved a deck of cards and spoon utensils, and during it the loser of each round would have to remove an article of clothing,'' it said.

The defendant would invariably be the loser each time the game was played and would end up naked in front of the children.

``However, the game would continue until eventually each player would also be naked.

``Once the children were naked the defendant would take two of them into his bed and lie with them under his blankets, cuddling.''

Pearson declined to comment when interviewed by police about the allegations.

A search of his house uncovered two devices used to covertly record people, as well as child pornography.

Pearson used one of the covert recording devices to record footage of a young boy using the bathroom at a flat he lived in, four males using a public toilet in Eglinton Rd, and boys and men using the changing room in Moana Pool.

More than 130 objectionable images were found at his home as well as videos of children performing graphic sexual acts.

Each jail term is to be served concurrently.

Many of the charges, including those of sexual violation and indecent assault, were representative meaning they accounted for many instances of the same crime being committed.

In sentencing Pearson, Judge Kevin Phillips said he was not sure if the man was sorry about the harm he had caused.

``You are remorseful? I don't know if that's so,'' Judge Phillips said.

``I think you are are sad you got found out. I think you suffer regret on that basis.''

Pearson stared directly ahead throughout the sentencing and did not acknowledge his victim's mother as she read her statement or as he was led away.

Pearson has also been added to the sex offenders registry.