Painting it black at Pirates club 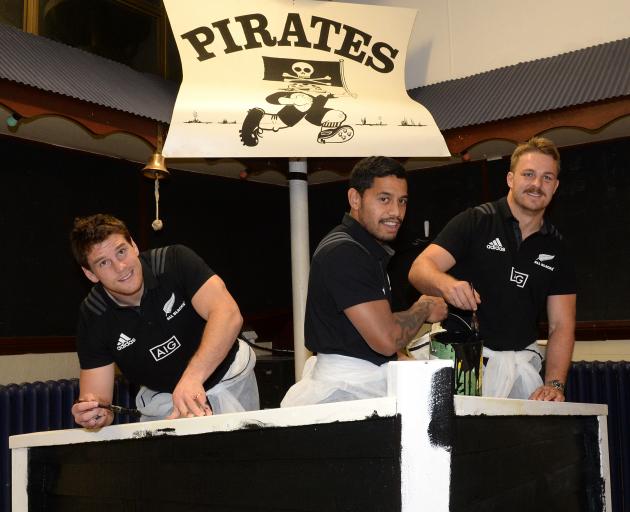 "The All Blacks have always been premier finishers and we wanted them to finish the job,'' the club's junior president Tony Kramers said.

Club members, including juniors, had much appreciated the chance to see the All Blacks and gain their support during the build-up to the third and final test against France at Dunedin's Forsyth Barr Stadium this weekend.

"And it's great getting the opportunity to give our club a spruce up,'' Mr Kramers added.

"Volunteers are the heart of all rugby clubs in New Zealand and Pirates are no different,'' Mr Kramers said.

Mr Kramers said the Pirates club, founded in 1882, had faced "struggles'' over the past three years, no longer having a men's team in the top premier competition.

But the club did have a premier two team, its women's team recently finished runner-up, and the club had 170 junior players.

Revitalisation efforts were continuing at the club and he was ``just humbled'' by the strong community support it was attracting.

"It's hopefully a bit of a call to action for present and former members of the club to get reinvolved with the club.''

"We're pushing forward. We're surviving, we're ticking over, we've got great people in our club--it's all about volunteers.''

"It's a great opportunity to recognise the invaluable work our rugby volunteers put in every weekend to keep our game going across New Zealand,'' Smith said.

Smith, Taylor and Tu'ungafasi also joined volunteers for a question and answer session and a special screening of the first episode of the recently released documentary All Blacks: All or Nothing.

Yesterday's All Blacks activities were part of National Volunteer Week, which includes a "Heart of Rugby'' campaign, recognising the country's 20,000 rugby volunteers, including coaches, club staff, and referees.