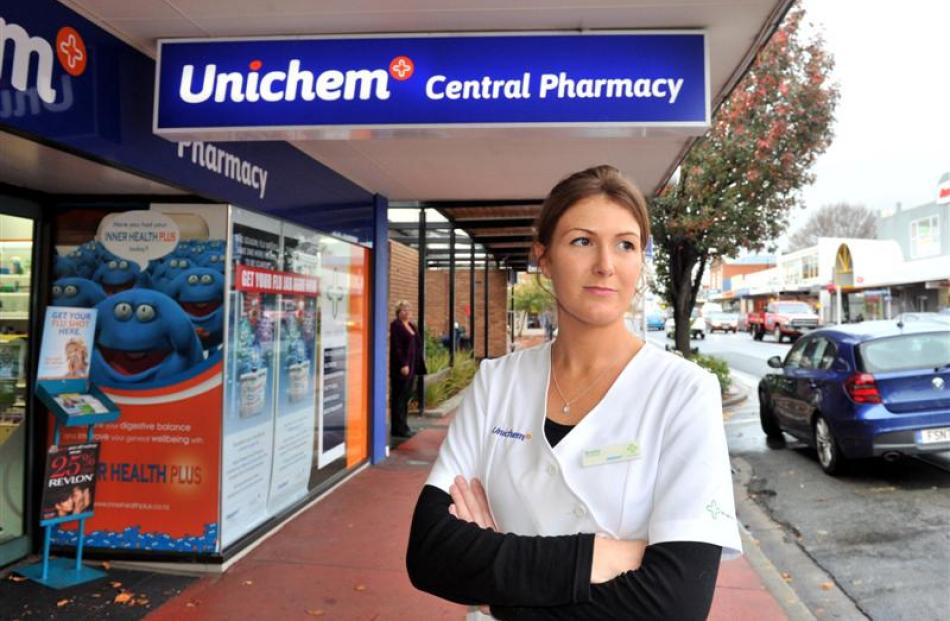 <p style="margin-bottom: 0cm" class="western"> Brooke Cain, manager of Unichem Central Pharmacy Mosgiel, is fed up with a lack of free parks for customers in the area. Photo by Linda Robertson. </p>

Business owners in Green Island and Mosgiel are becoming frustrated with a lack of available parks for customers in their areas.

Green Island Night 'n' Day owner Antony Duthie said he was frustrated with the lack of enforcement action from the Dunedin City Council over cars parked past the allocated time limit in Green Island.

''Sometimes they will stay outside the shop and across the road from the shop all day.

''The time limit is 15 minutes outside the shop and 1 hour across the road.''

He said the slow turn around of parks had hurt his business, as the majority of his customers drove there and often found it hard to find a park.

He said there was a lack of DCC parking officers patrolling the area.

''You only see them out here once or twice a year.

''What's the point of having the time limits if you're not going to police it?''

In Mosgiel, Unichem Central Pharmacy owner Amy Von Huben said there was ''definitely a lack of free parking spaces'' in the area.

She said a lack of free parks on the main street in Mosgiel made it difficult for her customers, who were often sick, to park close to the store.

The pharmacy is creating its own private car parks behind the premises. Pharmacy manager Brooke Cain said customers sometimes complained that they had to go around the block ''three or four times'' to find a park.

A DCC spokesman said the council did not have the resources to place fulltime parking officers in either Green Island or Mosgiel.

He said a part-time parking warden in Mosgiel had been removed a few years ago because their presence had not been justified.

Parking officers patrolled both areas if complaints were received and visited Mosgiel once a week, he said.